Mercedes: Nico Rosberg quickly out of the blocks 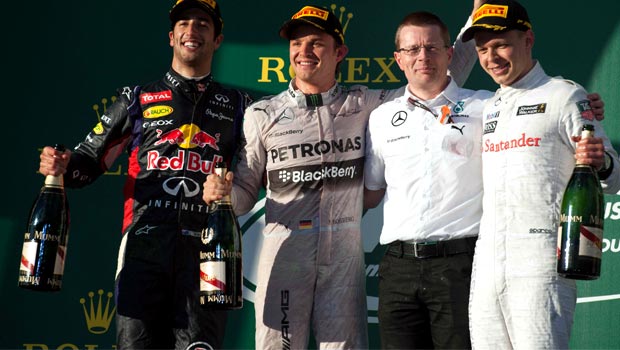 Nico Rosberg’s hopes of backing up his win in Australia with further success in second grand prix of the season in Malaysia received a boost after German was quickest in Friday’s practice session.

Whilst a number of his rivals struggled with technical issues, Rosberg clocked a best time of one minute, 39.909 seconds in the second session at a steamy, slippery Sepang circuit, where track temperatures reached 50 C.

Mercedes team-mate Lewis Hamilton held the fastest time in the opening session, but grip issues hampered his efforts second time around and he had to settle for a fourth-best time of 1.40.051.

Kimi Raikkonen was only a fraction behind Rosberg in second with reigning world champion Sebastian Vettel third fastest after clocking a best time of 1:39.970 seconds.

Lotus, meanwhile, had a shocker with both drivers encountering problems in practice. With smoke bellowing out of his car, Pastor Maldonado did not even make it out for the second session and team-mate Romain Grosjean was unable to set a time on either run.

Meanwhile, 2008 world champion Hamilton, who was forced to retire early in Australia, reckons the extreme heat and humidity at the Sepang circuit will have a crucial part to play in determining the winner of Sunday’s race.

“I hope we’re at the top, and as I’ve not won here before I really hope I can do that, and that’s what I’m here to do.”