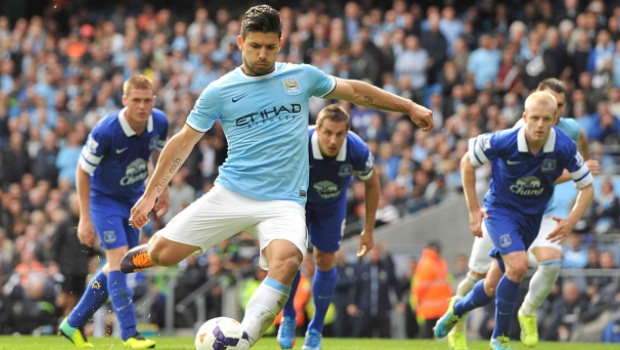 Sergio Aguero has admitted he is very happy with life at Manchester City and believes the club is going in the right direction.

Despite admitting in the past he was settled in Manchester, the striker has been linked with a move away from the Etihad Stadium.

Rumours suggest Real Madrid were after his services in the summer as they look to provide competition for Karim Benzema.

Since his move from Atletico for £40million in 2011, Aguero has settled brilliantly in England and, despite the continuous rumours, he is adamant he’s happy with the Citizens.

“I’m very happy at City, very happy since the day I came,” he is quoted by the Observer. “I knew that the project was good and in my head there is nothing else but Manchester City, so how long I’m going to be at City is just never a question.

“I’m happy here, my family’s here when they come to England, all I can do is give everything I have for the club and concentrate on achieving for the club.

“We are improving every year the team, the club, the club is growing, we are working in the same direction to get the club as high as possible.”

He added: “Now we have a new manager with a new challenge, we need time to implement his ideas. But the club is doing the right thing, it’s doing it properly. We’re all fighting for the same, which is to make the club the best possible.”