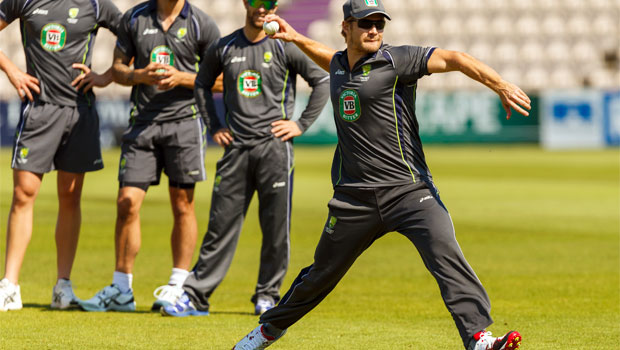 Australia are confident Shane Watson will be fit enough to bowl in the first Ashes Test of the series in Brisbane this week after taking part in a nets session on Monday.

The all-rounder had been a doubt for the opening Test on November 21 after returning from the one-day series in India with a hamstring injury.

While the problem didn’t hamper Watson’s batting it did look set to curtail his participation in the match at the Gabba as a bowler.

However, the Baggy Greens were given a boost on Monday when Watson briefly bowled in a net session, albeit off a shortened run-up and at a reduced pace.

Australia team physiotherapist Alex Kountouris is confident the 32-year-old will be fit enough to bowl in Queensland but says they will be taking no risks with him.

“He’s on track to be bowling in the next week, which means he might bowl in this Test match if he keeps making good progress,” Kountouris said.

“We’re building him up to bowl whenever he’s ready to go. So if it’s this Test that’s great – if it’s a bit longer then that’s how it’s going to be.

“We’ll reassess and make a decision on Tuesday where we go from there. We’re realistic – he’s coming back from an injury.

“He’s an important batter and we’ve taken no risks in getting him here so we’ll continue to do that.”

Should Watson bowl then Australia look set to go with a five-man attack which could include spinner Nathan Lyon.

If the New South Wales man doesn’t prove his fitness in time then Darren Lehmann is expected to change tactics completely and go with four out-and-out pace bowlers.