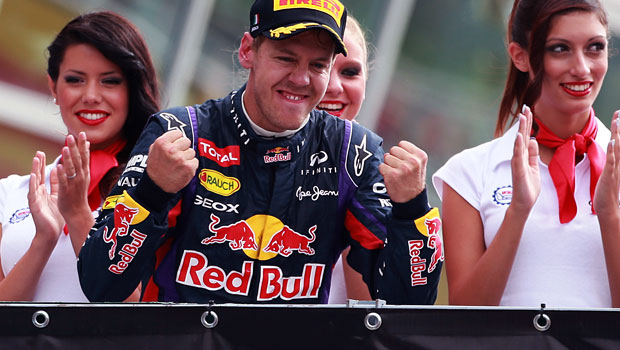 Red Bull’s Sebastian Vettel says he is struggling to come to terms with his achievements this year after becoming the first driver to win eight consecutive races in a single season.

The German driver has completely dominated Formula 1 since its return from the summer break, winning every grand prix since the Belgian GP at the end of August.

On Sunday the four-time world champion eclipsed the achievements of Michael Schumacher and Alberto Ascari by making it eight in a row in a single season with victory in Texas.

Should he win the last race of the season in Brazil he will equally Ascari’s record of nine consecutive race wins, set over the course of the 1952 and 1953 seasons.

The 26-year-old says he will firstly enjoy his latest record-breaking achievement before refocusing and going for a ninth win in Sao Paulo next week.

“Numbers do not make me jump in the car but we realised we had done it and it makes you very proud,” Vettel said.

“You realise what it means to look back at those names. People look back and talk about certain drivers. One day people might talk about our time.

“It is one of those records that was not meant to be broken ever and it’s very difficult to understand we actually did it.

“It is down to team effort. Everyone is willing to push. This morning at eight o’clock the car was in pieces – we had the gearbox on the floor we had some concern about reliability and the guys were trying to fix it and it ran fine in the race.

“Since the summer break I don’t know what we have all done, but we need to remember for future years should we require a little bit more than just good performance.”

The victory moved Vettel 150 points clear of his nearest rival, Fernando Alonso, in second place, the Spaniard making sure he will finish as runner-up to Vettel again with a fifth-place finish in Texas.