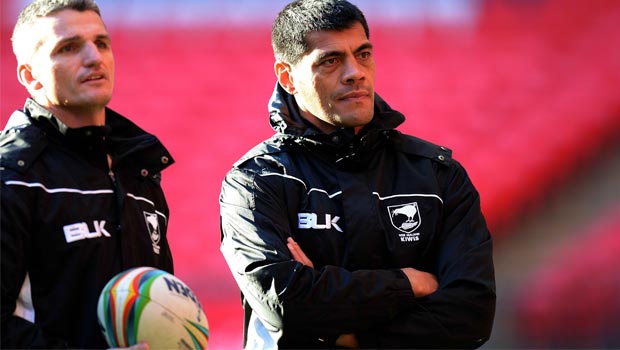 New Zealand coach Stephen Kearney has acknowledged his side are the underdogs for Saturday’s Rugby League World Cup final but believes they have what it takes to defeat Australia.

The Kiwis caused a huge upset five years ago when they beat the Kangroos 34-20 on home soil to claim the World Cup for the first time in their history.

The two southern hemisphere nations will meet again this weekend for the right to call themselves world champions, with Australia the favourites having stormed through the tournament.

Tim Sheens’ men haven’t conceded a try in their last four matches and going into the final have been given a boost with the news full-back Billy Slater could be available.

While New Zealand have also been impressive at times in reaching the final, they were somewhat lucky to come through last week’s semi-final with England, with Shaun Johnson’s last-minute converted try booking their place in the showpiece.

Kearney, who is looking to become the first coach in 59 years to retain the World Cup, accepts his team will be up against it at Old Trafford but believes they can deliver another performance capable of stopping the Aussies in their tracks.

“Looking at their team, we’re well aware of the calibre of player they have,” said Kearney.

“We do start as underdogs but the lads are confident that, if they can bring their best performance on Saturday, we give ourselves a great opportunity.”

New Zealand have been dealt a blow in the build-up to the game with the news second rower Frank Pritchard will miss out with a hamstring injury.

Greg Eastwood has been called into Kearney’s 19-man squad in place of the experienced Penrith forward.

“He’d love to play and we’d love to have him there but the stakes are as high as they get this weekend and he’s not 100 per cent,” Kearney added about Pritchard.

“It’s naturally very tough for him to be this close and ruled out but we’re very happy with our cover.”

Elsewhere, wingers Manu Vatuvei and Roger Tuivasa-Sheck have both been included in the squad despite being slight injury doubts.