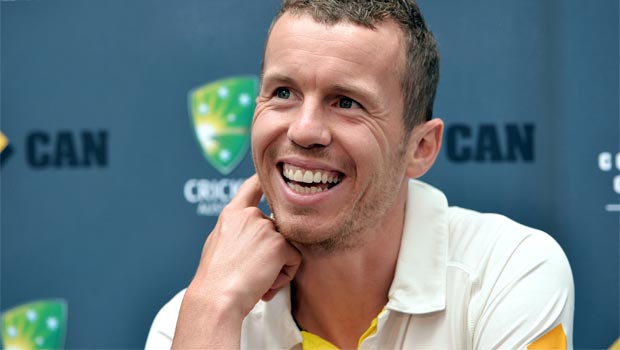 Australia paceman Peter Siddle has told England to except more sledging as the current Ashes series unfolds Down Under.

The Baggy Greens have already taken a 1-0 lead in the best-of-five clash thanks to a crushing 381-run defeat in the opening Test in Brisbane.

The hosts are out for revenge after being defeated in the previous three series and there is no doubt they are fired up following an exchange between captain Michael Clarke and England bowler James Anderson on day four of the first Test.

After the match it was also confirmed out-of-form England batsman Jonathan Trott was to return home because of a “stress-related condition”, but there appears to be little sympathy from the Aussie camp.

Clarke’s run in with Anderson was caught by an on-field microphone and as a result he was fined 20% of his match fee, but Siddle feels his skipper was a victim of bad luck.

He told Radio Sports National: “It’s just natural. It wasn’t any different to normal. If it hadn’t have been on the mic a lot people would not have said so much about it.

“The most disappointing thing is that it actually came up (on the broadcast). It’s not meant to at that time and it is very stiff for Michael.
“Throughout the series there will be more of it going on but it will be under control.”

Australia clearly know how important Anderson is to England’s bowling attack, with Siddle all but admitting Australia are targeting the 31-year-old Lancashire star.

He added: “Anderson brought it on himself. So fair’s fair.

“There was a lot of other stuff going on and James Anderson was in the thick of it and a culprit for it all happening.

“He is one of the leading wicket-takers in the world so he is happy to have a chirp but as long as Mitchell Johnson keeps bowling them around his ears that will quieten him up pretty quickly.”

Pre-series the hostility had been aimed at Stuart Broad following his decision to not walk in the summer Ashes in England and it remains to be seen what is in store for the Notts man when the second Test starts on December 5.

The issue of Trott’s replacement at number three in the batting order will also need to be addressed by coach Andy Flower and captain Alastair Cook prior to the Adelaide showdown next month.