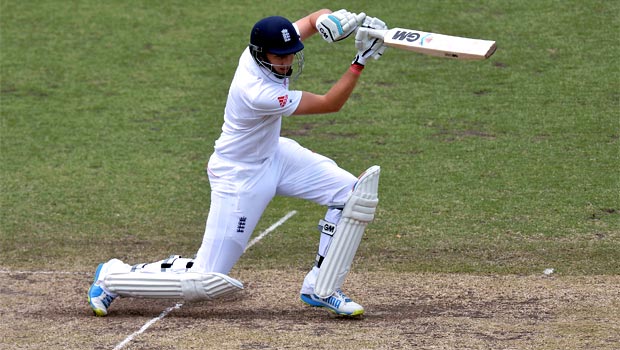 Joe Root’s elegant knock of 75 put England in position to go for victory on Saturday’s final day of their final Ashes warm-up match against an Invitational XI.

Root, who hit an unbeaten 58 in England’s rain-hit draw with Australia A at the weekend, shared a century stand with Jonny Bairstow (48) as England were eventually all out for 418 – a lead of 114 for the tourists.

Australian one-day opener Aaron Finch blasted 59 as the hosts began their second innings in positive fashion, but Graeme Swann, Steven Finn, Stuart Broad and Boyd Rankin all took a wicket each as England fought back.

The Invitational XI closed on 153-4 for a lead of just 39 runs at the Sydney Cricket Ground, giving England a great chance of pushing for a morale-boosting win as they prepare for Thursday’s First Test in Brisbane.

Yorkshire teammates Root and Bairstow helped England into a handy first-innings lead after England resumed on 302-5.

Root received treatment out in the middle after being struck on the hand, but he recovered well to post another impressive score off 106 balls – containing nine fours.

Bairstow, who will play in the opening Test if wicketkeeper Matt Prior fails to recover from a calf injury, was rarely as fluent as his colleague in scoring 48 before he edged behind.

England’s tail folded quickly once that partnership was broken, with Root eventually being bowled after attempting an ugly heave across the line.