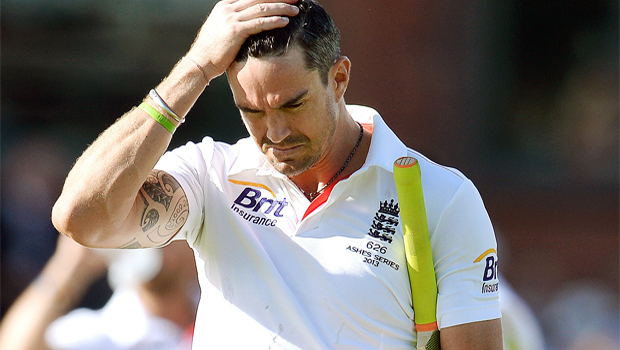 Kevin Pietersen admits England are in a ‘spot of bother’ against Australia in third Ashes Test, but says they are capable of turning it around.

The 33-year-old’s 23rd Test century has given England hope of rescuing the match, but they still trail the Australians by 233 runs and need another 34 to avoid the follow-on.

With two days of the Test remaining, Australia are definitely in the box seat but Pietersen is staying defiant and is backing Matt Prior, Stuart Broad and Jimmy Anderson to dig in and put more runs on the board.

“I know we’re in a spot of bother still but we’re 30 behind and if we can bat, just avoid that follow-on and get ourselves back into this game, anything can happen in this fixture still.”

Had it not been for a fifth-wicket stand of 115 with Ian Bell (60), England would still be in serious trouble, but he believes the pitch at Old Trafford still favours the batsmen.

“You’ve got to assess the wicket, not the situation. You can’t decide what kind of shot you’re going to play before you play it,” he said.

“It’s certainly still a good enough wicket to bat on and score runs.”

Meanwhile, as for his own 113 runs, Pietersen says it will stand for nothing if Australia go on to win the Test. On scoring the Test hundred, he added:

“It’s probably one of the best feelings you can have as a cricketer. But it’s only a better feeling if it actually contributes something for this team.

“Personal achievements are one thing but this is a team game and if this hundred gets us a draw or gets us a victory at some stage on day five then it’ll mean a lot more.”