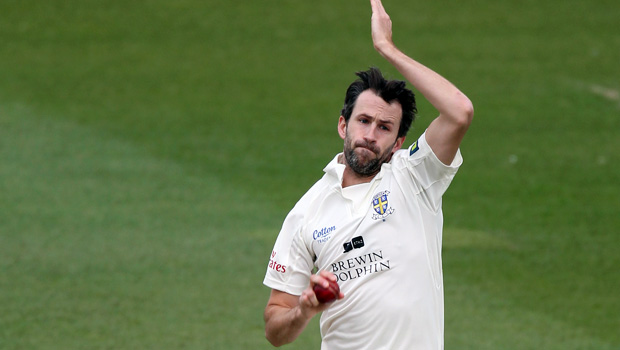 Durham paceman Graham Onions is hoping to cap off a fantastic summer by earning a recall to the England squad for the trip Down Under to take on Australia for the return Ashes series.

The 31-year-old has been instrumental in helping his county return to winning ways by claiming the County Championship title with a game to spare, bouncing back from a relegation battle last term.

He claimed 66 wickets at an average of 17.68 to help Durham win their third title in six years, despite having being written off in many quarters at the start of the campaign.

Onions’ form had certainly caught the attentions of the England selectors over the summer, and was in and around the squad for the Ashes’ clashes only to fail to make it into any starting XI.

There had been strong suggestions that he would feature in the game on his home ground but it was not to be, although he is still dreaming of getting the nod to at least be on the plane for the return trip as England look to make it four series’ wins on the bounce.

“That would be a dream, it would be fantastic,” he said.

“You play for days like these, and to play for England. I know that if I perform well in county cricket then I’ve always got a chance of playing for England.

“I still feel I’ve got a part to play and could potentially force my way into the England side.

“But it’s not easy, as we know from the last few years I’ve not played a great deal of cricket for England.”

Onions has managed to get over a long-standing back injury that ruled him out of the 2010-11 Ashes series, but is finding it tough to break into the starting XI.

James Anderson, Stuart Broad, Steven Finn and Tim Bresnan are seemingly ahead of him in the pecking order, while even Chris Woakes of Warwickshire was picked for the fifth Test and Chris Tremlett has bounced back from injury to return to the reckoning.