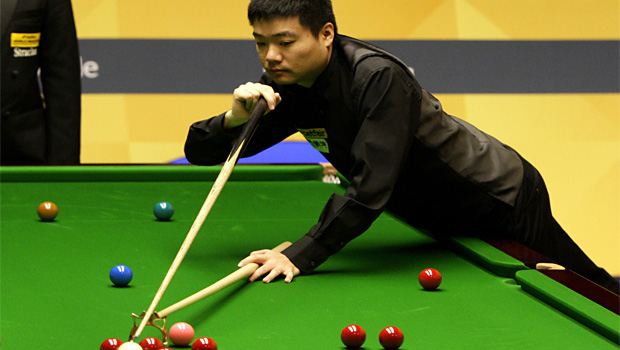 Ding Junhui is expecting a tough match against Xiao Guodong after the pair set up the first ever world ranking final between two Chinese players at Shanghai Masters.

Ding Junhui is expecting a tough match against the unfancied Xiao Guodong after the pair set up the first-ever world ranking final between two Chinese players at the Shanghai Masters.

Xiao, coached by Terry Griffiths, has been in superb form and proved too strong for Michael Holt in both players’ first ranking semi-final, sealing a 6-3 win with breaks of 111 and 127.

Winning is a habit the 24-year-old clearly enjoys and is in bullish mood about continuing his hot streak on Sunday.

“This is what I’ve been desperate to do for years. It’s not done if I lose. I have one more match to play, which will be my biggest stage in my career.”

Ding has also looked in fine fettle having dumped world number one Neil Robertson out on Friday, and followed that success up with a comfortable 6-2 win over Barry Hawkins.

The world number 12 is delighted to have found his form in his home country but is not expecting matters to get any easier when he takes to the baize against his compatriot.

“I’m happy to be in the final as it’s not often I play to such a good level at tournaments held in China,” Ding told World Snooker.

“Xiao is in top form and nobody knows what’s going to happen tomorrow. Everyone knows that he will clear up and win frames when he’s given chances and his safety has been great as well.

“He’s been playing against tough players and won all his four matches. Not every time a higher ranked player wins, and the trophy doesn’t always go to a top eight player.”