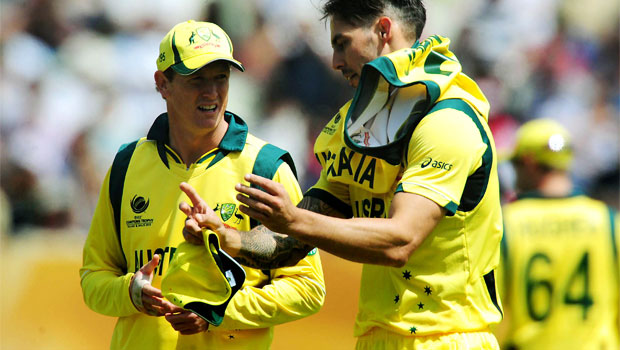 Mitchell Johnson and George Bailey were the two notable inclusions as Australia named their 12-man squad for the upcoming first Ashes Test against England at the Gabba which starts on November 21.

Johnson missed out on the Test squad for the 3-0 Ashes series defeat in England this summer, but he has since played his way back into contention with some stellar bowling performances during the one-day international series’ against England and India.

And with the injured Mitchell Starc ruled out, his inclusion was fully expected as the countdown to the opening Test in Brisbane continues.

Bailey, who is uncapped at Test level at the age of 31, also used the limited-overs games to stake his claim for a place in the Ashes squad with some high-scoring batting displays.

The remaining 10 players were all involved in the summer Ashes series with Shane Watson, who has yet to prove his availability to bowl as well as bat as he recovers from a hamstring injury, also included.

Cricket Australia national selector John Inverarity said: “Ten players who represented Australia in its most recent Test match… have been retained in this squad.

“Mitchell Starc is unavailable due to injury, and he has been replaced by Mitchell Johnson.

“We have included George Bailey in this line-up and are excited by what he can offer at Test level.

“George has shown outstanding international form over the past 20 months, including the recent limited-overs series in India.

“He is calm and composed and comes into the squad full of confidence.”

On the prospect of Watson being fit to feature, Inverarity added: “We’re hoping that he’ll be able to bowl.

“He’s progressing very well and he’ll certainly be fit to play. We believe he’s likely to be able to bowl.

“But it’s nine days to go, so we can’t give a definitive answer on that.”