England Cricket: Flower sees the ‘end of an era’ 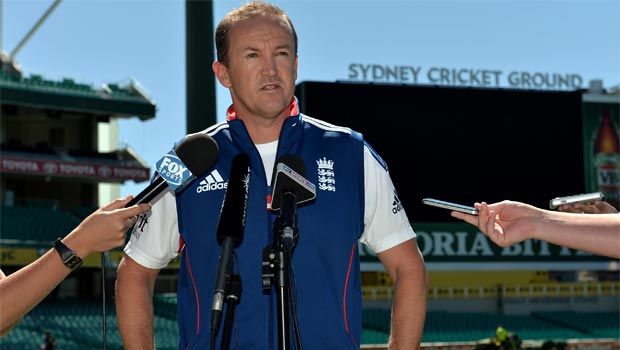 It was a different day but same old story as England collapsed yet again as Australia sealed a third Ashes whitewash inside three days at Sydney, and Team Director Andy Flower conceded that it was the ‘end of an era’ for Three Lions.

The Aussies began the day at 140-4 with Chris Rogers completing his second century of the series while others chased quick runs as they were dismissed for 276 to set England a target of 448.

That was never likely to happen given what had happened in the series before but the scale of yet another collapse will have left many scratching their heads.

England lasted a mere 31.4 overs – barely a session – in making 166, largely due to some late-order hitting from Ben Stokes and Stuart Broad, when Ryan Harris took his fifth wicket of the innings – having Boyd Rankin caught by Michael Clarke in the slips to start the Aussie celebrations.

It was another emphatic victory for the hosts, this time by 281 runs, and Flower – who has indicated that he wants to carry on his role – suggested that there are changes afoot as far as his side is concerned.

“This does feel like the end of an era and a chance of some sort of renewal for the England cricket team,” he told Sky Sports.

“This wasn’t good enough so there should be change of some description. It needs wise people making good decisions at the top. We should take a bit of time to review it properly.”

England do have the chance to salvage some kind of pride when the five-match one-day series gets underway on January 12 and, if that fails, there is still the two Twenty20 internationals towards the end of the month.