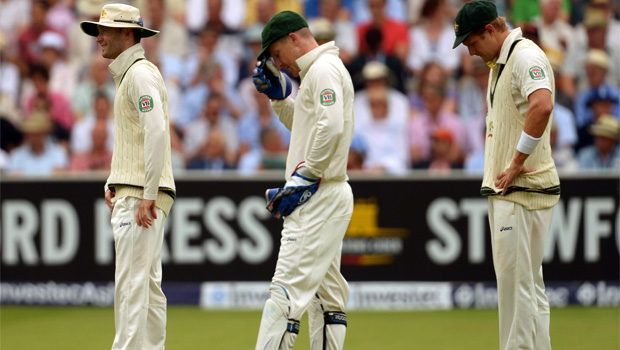 Australia captain Michael Clarke is taking positives from a 3-0 Ashes series defeat against England and believes they can win back the urn on home soil.

Clarke says his side showed huge signs of improvement over the last three Tests and they will take that into the return series that begins in Australia later this year.

Only the rain denied them victory in the third Test, while they dominated for spells in the fourth Test before scoring 492 runs in their first innings at The Oval.

Clarke is delighted with the way his side have improved over the series and if they can carry on in such a manner, he believes they will be in a strong position in Aussie conditions.

“I certainly think we take a lot of positives, especially from the last three Tests,” said Clarke.

The first Test in Australia begins in Brisbane on November 21st and Clarke also believes as soon as they get that elusive first win, there will be no stopping them.

“When we get a win we will run with that momentum,” added Clarke.

“We need to look at the whole series and areas where we can improve, but we will take a lot of confidence from the way we played in the last three tests.”

Despite taking the positives, Clarke was gracious enough to admit that England deserved to win the series.

“It doesn’t matter how you play but the result is there, England won 3-0,” he said. “There’s always more than one way to skin a cat so they deserve credit for winning.”