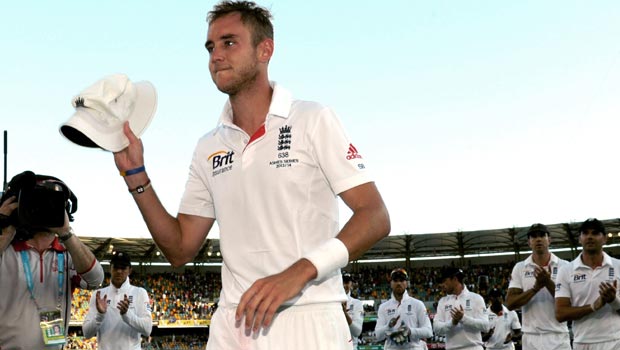 Stuart Broad was England’s hero as the paceman responded to boos from the Australian fans to claim five wickets as the tourists restricted Australia to 273-8 on day one of the first Ashes Test in Brisbane.

The Nottinghamshire bowler had been heavily criticised by the Australian media in the build-up to The Gabba showdown after he controversially decided not to walk when it looked like he was out in England’s home Ashes series this summer.

He had been painted as the villain but appeared to revel in the role and took five wickets, including Aussie skipper Michael Clarke again, ending the day with figures of 5-65.

Jimmy Anderson took two wickets, while Chris Tremlett also claimed one as Australia, who were 132-6 at one stage, did recover somewhat thanks to a seventh-wicket partnership of 114 between Brad Haddin and Mitchell Johnson.

Haddin ended the evening session unbeaten on 78 as only he and David Warner (49) took advantage of what looks like a good batting pitch in Brisbane.
England will certainly feel they have bossed the first day and Broad was delighted with his performance.

“My confidence is high,” he said. “I thrive off niggly cricket, there is something about playing Australia that brings the best out of me.

“This morning it was quite a nervy occasion and then we were getting abuse from the boundary but we were all singing along with it!

“To get eight wickets in a day we’re absolutely delighted. We’ve been here three-and-a-half weeks but we’ve not had days as hot as this but everyone kept going and that showed with the late wickets.

“It swung for a little bit but we tried to wobble the seam to see if we could get some movement but there wasn’t a lot, there was nothing there for [Graeme] Swanny and the wicket wasn’t abrasive at all so once you get through that 30-40 overs mark it becomes very difficult for the bowlers.”

Broad’s dismissal of Clarke was a key moment and the sixth time in eight innings that he has managed to get him out so the England star was obviously pleased with that big wicket.

He added: “Clarke’s obviously their star man and averages over fifty so it’s great. To have a plan and execute it as a bowler is excellent and so quickly in the first innings of the first Test is brilliant.

“The first bouncer is always the most dangerous and the reaction of the players showed how much it meant. I wouldn’t say I have a hold over him, his record is phenomenal, the key was getting him in early enough with a hard enough ball to make that plan work.”