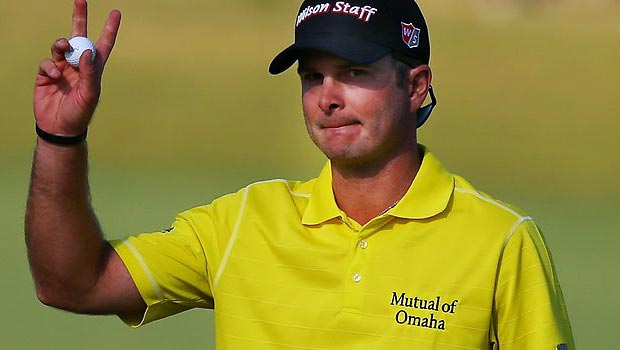 Kevin Streelman of the United States and Denmark’s Thomas Bjorn both managed rounds of 66 to share the lead at the end of day one of the Golf World Cup at Royal Melbourne.

Streelman upstaged his compatriot Matt Kuchar in the revamped team event, which is now much more individually focused, as he finished on -5 along with Bjorn following an impressive round.

He should have led outright after five birdies on the back nine but two late bogeys gave Bjorn a share of the lead.

Streelman said: “I made some good birdie putts today and some par saves as well, so pretty happy. It’s just an incredible golf course, I love it. I just had a lot of fun there to be honest.”

His team-mate Kuchar could only manage a level-par 71 after four bogeys on the back nine, a score matched by Bjorn’s fellow Dane Thorbjorn Olesen.

Bjorn recovered from four-putting on the fourth hole for a double-bogey six and he was delighted with his improvement on the stunning Melbourne course.

He said: “I thought, ‘Well, this could be a long day’, but I just kind of kept my composure and made some good birdies and kept playing solid. It is, in my eyes, probably the finest golf course you can ever play.”

Portugal sit in third place in the team event on -2 – three behind both Denmark and defending champions USA – while in the individual event South Korea’s KJ Choi, Martin Laird of Scotland and Stuart Manley of Wales all share third on four under.

English duo Danny Willett and Chris Wood are just about in touch with scores of 69 and 75 respectively, but it was a disappointing opening day for pre-tournament favourite Adam Scott in his homeland.

The in-form world number two, who has won both the Australian PGA and Australian Masters already this month, suffered a miserable quintuple-bogey nine on the 12th as could only post a 75, while his countryman, Jason Day, shot a 68 to be two off the pace.

Graeme McDowell, playing for Ireland, carded a one-over 72 as double-bogeys on the sixth and 18th badly affected his day.