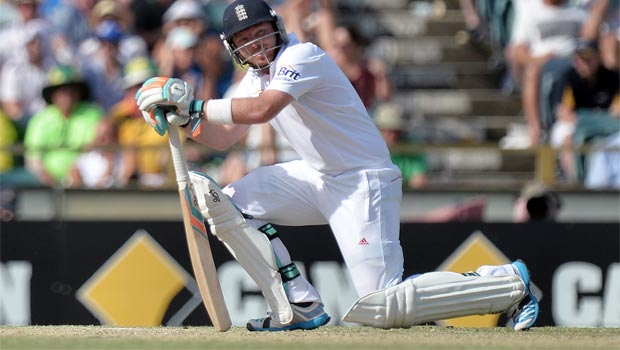 Ian Bell believes England can still win the third Ashes Test in Perth and keep the series alive despite Australia being in a dominant position going into day five at the WACA.

England battled away on day four to peg Australia back after it looked as though they would wrap up the series with a day to spare, and Bell is refusing to rule out a shock win tomorrow.

England still need 252 runs to win the Test and have five wickets in hand but it will still take a mammoth effort from the remaining batsmen to pull off the victory.

Much will depend on Ben Stokes and Matt Prior, who are 72 and seven not out respectively, and Bell believes they have got what it takes to dig in.

“There are a few cracks on the wicket but apart from that it’s a good surface. A bit of luck our way and you never know,” Bell revealed.

“You do see a lot of pitches go like that. This has done a bit more than other pitches in Australia. If you get one that goes off the crack then fair play.

“He (Prior) is ready for a good fight and to scrap it out. That’s just Matt. If Stokesy can stay with him we’ll give it a good go tomorrow.”

Even so Bell admits England have fallen well short of the standards they have set themselves, hence the situation they find themselves in.

“We have been put under a lot of pressure, the way Mitchell Johnson as come in aggressively with Ryan Harris and Peter Siddle backing him up,” Bell added.

“Apart from day one in Brisbane where we bowled well we have been on the back foot. A lack of first innings runs has put us under a lot of pressure.

“They are bowling well as a unit and have a clear plan, as individual bowlers as well.

“I don’t think we set the standard we usually do in the field. We let ourselves down a bit in the field but came back and showed a bit of fight with the bat.”