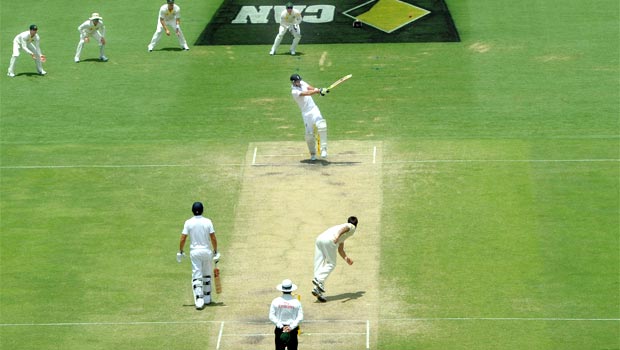 Australia are closing in on victory in the first Ashes Test after another dominant display on day three at the Gabba.

Having dismissed England for a paltry 136 on Friday, the hosts reached 401-7 in their second knock before skipper Michael Clarke called time on the innings.

England required a world-record 561 for victory but slipped to 24-2 at stumps, with both Michael Carberry (0) and Jonathan Trott (9) back in the pavilion.

There were plenty of heroes for the Aussies but the main plaudits went to David Warner, who continued his excellent form with 124, and Clarke, who stroked 113 from just 130 deliveries before being bowled by Graeme Swann.

Failures for Chris Rogers, Shane Watson and Steve Smith did not seem to matter, as Brad Haddin added 53 to his first-innings 94 and Mitchell Johnson hammered a rapid, unbeaten 39 as the hosts ran Alastair Cook’s men ragged on day three in Brisbane.

A solid start was required when England batted second time around but Carberry spent 14 balls at the crease before unluckily chopping a Ryan Harris delivery onto his stumps for a duck.

Trott showed his vulnerability against fast, short-pitched blowing in the first innings and Johnson got him again second time around as the Warwickshire man flicked a short ball straight down Nathan Lyon’s throat at deep backward square leg.

Cook is still there on 11 and will have Kevin Pietersen, who was three not out at stumps, for company on Sunday morning.

England scored 517-1 to secure a draw in the Brisbane Test three years ago and it is going to take a similar Herculean effort to come out of this encounter with honours even.