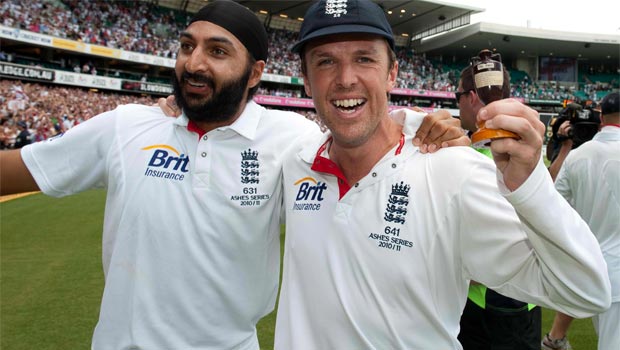 Bowlers Graeme Swann and Monty Panesar were on form as they helped England draw their second Ashes Test warm-up match against the Cricket Australia Chairman’s XI.

England’s pace attack struggled to cause problems at Traegar Park, but Swann and Panesar claimed seven of the eight wickets. Steven Finn, Boyd Rankin and Ben Stokes failed to show what they could do with the selectors watching, as they try to impress ahead of the second Ashes Test, which starts in Adelaide on Thursday.

Finn conceded 61 runs from his 15 overs, Rankin finished with figures of 1-52, and Stokes never showed his ability with the ball. Both Swann and Panesar displayed their talent, though, at the pivotal moment, as the Chairman’s XI looked to be on top.

Swann put his poor performance from the first Test behind him, and picked up three early wickets in the morning session. The spinner removed Marcus Harris, Michael Hill, Alex Keath and Jake Doran in the day’s play, with Panesar stepping up to the mark to dismiss Steve Cazzulino, Luke Robins and Josh Lalor.

The tourists eventually bowled the home side out for 254-8, but then once again their battling exploits failed to shine a positive light on their squad.

The game was eventually drawn, after two days of play with England on 47-1, to give themselves a lead of five.

Joe Root (1) gloved a delivery to Simon Mackin early in the innings, but his dismissal gave Gary Ballance the chance to stake a claim and took his time to steady England’s order. Ballance played safe and allowed Michael Carberry to play freely and he 37 of 43 balls to secure the draw.