Posted by Vincent Henderson on December 1, 2013 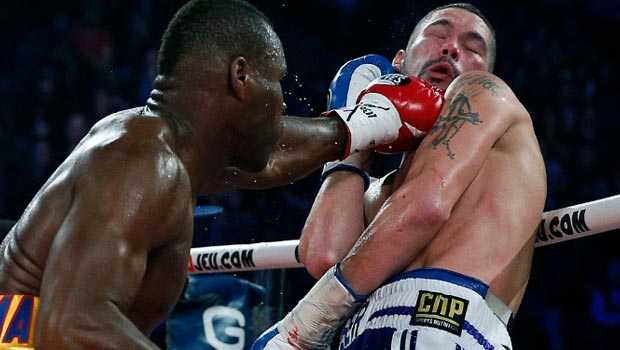 The words of Tony Bellew came back to haunt him as he was outclassed in his WBC light-heavyweight title fight in Quebec City, losing to Adonis Stevenson by a technical knockout in the sixth round.

There had been plenty of trash talk before the fight but it was the Canadian who was able to walk the walk after knocking the Liverpudlian to the canvas in the sixth, before the referee called an end to the fight moments later when he was backed into a corner after a barrage from the champion.

It was the first time that Bellew had been stopped in his 23-fight career and Stevenson insisted that the result was never going to be in doubt.

“I told him, when he’s going to feel my power, I’m going to drop him out.”

Bellew had enjoyed some success in the early exchanges, bloodying the champion’s nose in the third round, while Stevenson found himself on the floor in the fourth after a wild exchange, although the referee had ruled that it was a slip.

Despite the ill-tempered build-up to the fight, Bellew had no complaints about the result, in fairness to him, and paid his tribute to the winner.

“I gave it everything and the better man won. Gutted,” Bellew said on Twitter.

“The fans who travelled, I’ll be forever in your debt. I’m truly shocked. Like I said the better man won, no excuses. Thanks again for the support.”

Russian WBO light-heavyweight champion Sergey Kovalev stopped Ukrainian Ismayl Sillakh in the second round on the undercard, although Stevenson appears to be favouring a fight against either Carl Froch or Bernard Hopkins.

“The fans of Quebec City want Carl Froch or Bernard Hopkins,” said Stevenson. “Kovalev is a good fighter too.

“I don’t have a problem with Kovalev, right now but the fans of Quebec City want Carl Froch and Bernard Hopkins. That’s what the fans want.”

Stevenson has now improved his record to 23-1, which also includes 20 knockouts, with fans eagerly awaiting news of his next opponent.