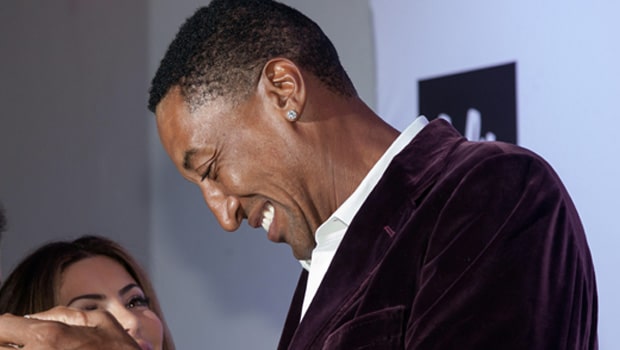 Scottie Pippen has one of the most polarizing legacies of all-time. Pippen is one the greatest wing defenders the NBA has ever seen, a capable scorer, a perennial All-Star and a six-time NBA champion.

No one seems to agree on Pippen’s greatness and is hard to rank him on the all-time list. Many believe that he’s underrated, others think that he’s overrated. Michael Jordan’s shadow is one of the reasons why Pippen’s greatness is confused. Pippen recently shared his All-Time Starting 5:

Four-time NBA champion Horace Grant, part of the Bulls teams that won the first three-peat, was asked about Pippen in the ‘The Last Dance’ and said: “I have never seen a quote-unquote No. 2 guy, as decorated as Scottie Pippen, portrayed so badly, I have never seen this in all of my life.”

Pippen deserves all the credit and praise that should come his way for being a champion with Michael Jordan. Pippen is also 6-0 in the NBA Finals and like MJ said: “I didn’t win without Scottie Pippen.”

Horace Grant is right, Pippen should have been portrayed differently in some of the episodes but Jordan recognized his importance: “I would never be able to find a tandem, another support system, another partner in the game of basketball like Scottie Pippen, he was a pleasure to play with.”

Throughout the history of the NBA, in order to win a Championship, you have to have a Batman, a number one dominant player that can impose his will in the key moments the team needs it. That said, we’ve also seen time and again that it’s the number two, the Robin, who ends up being just as important to the team’s success. Someone who can facilitate the offense, get everyone involved, score when needed and also play great defense.

Many players have fulfilled this Robin role in their careers but only Scottie Pippen embraced it and excelled in it for most of his time in the NBA.

Scottie Pippen reportedly hasn’t spoken to Michael Jordan since the first episode of ‘The Last Dance’ aired on April 19, 2020. Pippen didn’t like the way he was made to look and didn’t appreciate that MJ questioned his decision to undergo ankle surgery at the start of the 1997-98 NBA season and not during the offseason.

Pippen delayed his surgery to prove a point and he rightfully felt that he was far more valuable to the Bulls than what his contract reflected.

“I thought Scottie was being selfish, worrying about himself instead of what his word was to the organization and to the team,” Jordan said in the documentary.

Jason Hehir, director of ‘The Last Dance’ as well as executive producers Estee Portnoy and Curtis Polk deserve some of the blame. Pippen is praised but is also criticized. His portrayal in ‘The Last Dance’ reflects the mixed opinions that his greatness generates but it can’t be denied that it could have been done better.

Pippen left the team in 1998 to join the Rockets and the Trail Blazers before retiring with the Bulls in 2004. Nowadays, Pippen makes regular appearances on ESPN’s ‘The Jump.’