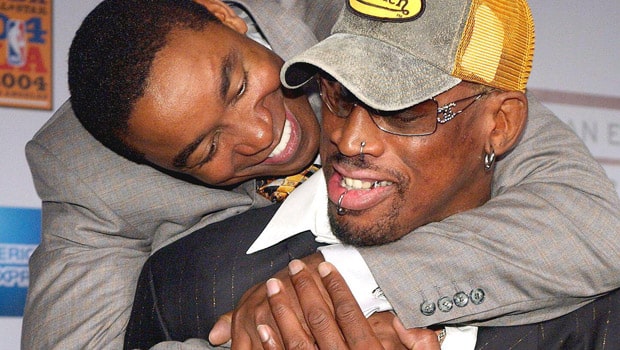 “We were standing in the lay-up line, warming up and shooting, and Rodman was standing back and watching everybody shoots. I said, ‘Hey, come on, you have to participate; everybody’s shooting lay-ups, you have to shoot lay-ups, too.’ And he said, ‘I’m just watching the rotations on the basketball.’ I said, ‘Excuse me?’ He said, ‘Like when you shoot, your ball spins three times in the air. Joe’s sometimes has 3 1/2 or four times.’

That’s how far Rodman had taken rebounding, to a totally different level, like off the charts. He knew the rotation of every person that shot on our team — if it spins sideways, where it would bounce, how often it would bounce left or right. He had rebounding down to a science, and I never heard anyone think or talk about rebounding and defense the way he could break it down.

When you talk about basketball IQ, I’d put Rodman at a genius level.”

The Pistons drafted Dennis Rodman with the 27th overall pick in the 1986 NBA Draft out of Southeastern Oklahoma State University. A five-time NBA champion, Rodman was a key part of the Bad Boys Pistons team that won two NBA Championships and years later he joined Jordan and Pippen in the Bulls to form perhaps the most formidable Big Three in NBA history. The trio won three NBA Championships in three years. After two tough years with the Spurs, Rodman was traded to the Bulls in October, 1995. Many thought that Rodman would not mesh well with Jordan and Pippen but they were wrong.

Dennis Rodman’s rebounding and defensive skills proved invaluable to the Bulls. Many consider Rodman the greatest rebounder of all-time. He played two more seasons in the NBA after winning his third championship in three years with the Bulls and in recent years, he received a lot of media attention because of his friendship with North Korean leader Kim Jong-Un.