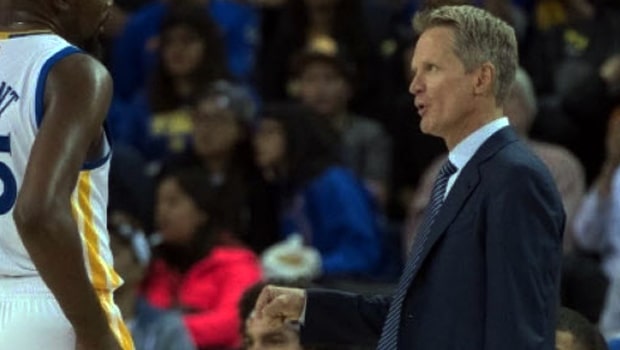 Coach Steve Kerr felt his Golden State Warriors had refused to break following a dramatic 106-105 win over the Toronto Raptors that kept alive the NBA Finals.

The two-time defending champions went into Game 5 in Toronto trailing the series 3-1, needing the win to extend the tussle back to their home court in Oakland on Friday night. Steph Curry scored 31 points for the Warriors, who lost the returning Kevin Durant to injury in the second quarter in a night of mixed emotions.

Durant, the 2017 and 2018 NBA Finals MVP, left the venue on crutches and will have a scan to reveal the extent of damage to his right Achilles tendon. He had missed nine games prior to Monday’s showdown in Toronto and Kerr admits that losing Durant is a major blow.

“On the one hand I’m so proud of them, just the amazing heart and grit they showed, and on the other I’m just devastated for Kevin,” Kerr said.

“So it’s a bizarre feeling we all have right now – an incredible win and a horrible loss at the same time.”

The Warriors have won three titles in the past four seasons but have their backs firmly to the wall against a Toronto side seeking a first NBA Finals win in their history.

Kawhi Leonard top-scored for Toronto with 26 points, including a back-to-back three-pointer, to give his side a lead of six with three minutes left in the fourth quarter.

Klay Thompson and Curry nailed three-pointers to move the Warriors ahead with 60 seconds left, before Kyle Lowry cut the deficit to a single point. With the Championship on the line, a superb Draymond Green block denied Lowry a three-pointer on the buzzer, much to Kerr’s delight.

He added: “Our defence was bending down the stretch but we didn’t break and the last stop was tremendous.”

Golden State are 1.62 to win Game 6 on Friday with Toronto 2.38 to complete a series win in Oakland with a game to spare.