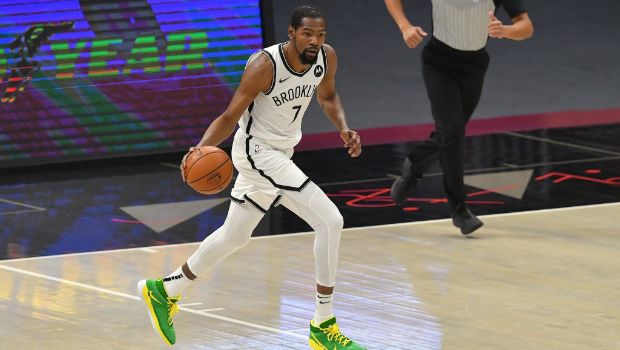 While there is no concrete news of Durant’s departure there are massive chances of him moving away from the Nets as he is looking to remove the Warriors stain and clinch another NBA Championship before he calls an end to his career.

On SiriusXM Radio, former Boston Celtics player Brian Scalabrine shared how moving to Celtics will be a great option for Kevin Durant. He feels that both parties will benefit from this trade as Celtics will look to make the push for the NBA Championship yet again after losing the NBA Finals against the Golden State Warriors.

Scalabrine suggests a package that will include All Star talent Jaylen Brown, a couple of first round picks and German center Daniel Theis which should be ideal to get Durant on their roster.

Scalabrine suggests that Kevin Durant has connection with several people in the Celtics organization which includes Jayson Tatum, head coach Ime Udoka and Defensive Player of the Year, Marcus Smart. So Durant will seamlessly fit into this Celtics team something which Scalabrine says will be ideal for the organization and also for KD himself.

“KD loves Marcus Smart as a player and the Hamptons visit and all that stuff. Ime Udoka, he coached him and he’s always chatting up with Udoka in the sidelines during the games. You get a chance to play with Jayson Tatum, a guy he’s played on the Olympic team with him where they worked out together and stuff like that, so, there is a connection, it is not crazy to think that could happen,” he added.

Durant’s Brooklyn Nets were swept in the first round by the Boston Celtics in their journey to the NBA Finals where they unfortunately lost against the Golden State Warriors. So if KD leaves the Nets there is a massive chance of him landing up in Boston rather than anywhere else as he understands their eagerness to win a title as it has been a long time.

For the Nets also this deal looks kind of agreeable as they get a 25-year-old All Star who is only going to get better with time and considering Brown’s performances in the postseason there should not be much question regarding his quality. Apart from that they will get first round picks something which they had to give away during that James Harden trade. However the Brooklyn Nets will hope that they get things under control and hold their most prized asset in Kevin Durant.