I am really excited, I miss playing with Curry and Green – Klay Thompson 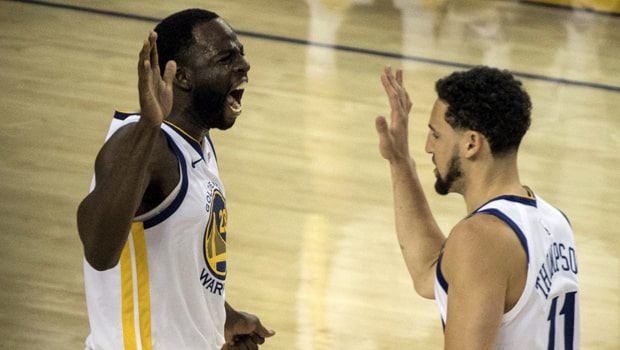 Golden State Warriors talisman Klay Thompson is excited to once again team up with Stephen Curry and Draymond Green. Thompson, who made a comeback to the NBA after a long hiatus of 941 days, reunited with his Splash Brother Stephen Curry but didn’t play with Draymond Green as the latter had missed the last few matches due to injury.

As Green is now all set to return to action, Thompson is looking forward to playing with the duo. Klay feels Curry and Green will definitely make his job easier and he is hopeful that he can do the same for his teammates on the court.

“It’s really exciting… I can’t wait to step on the floor to be firing on all cylinders with both those two guys. It’s going to make my job easier and I’m sure it will make their job a little bit easier. I’m really excited. I miss playing with those two. I think there will be a sense of normalcy when we’re back out there together again.”

Meanwhile, Thompson has thus far played only four matches as the team’s head coach Steve Kerr has limited his time to 20 minutes on the court.

However, Thompson hasn’t been able to hit the ground running as far as his shooting is concerned. He shot ​​5-of-14 from the floor against the Minnesota Timberwolves on Sunday.

Thompson admitted that he hasn’t been right on the money with his shooting since his return but he is going to keep trying as it is his forte.

“It’s a new challenge for me to play within these minutes and be as efficient as I can. It pales in comparison to what I went through the last two years. Although I’m not shooting the ball as well as I want to, I’m gonna keep shooting because this is what I am best at.”

Golden State Warriors will next face Detroit Pistons on Tuesday.