Devin Booker Should Have Been the NBA MVP Over Nikola Jokic 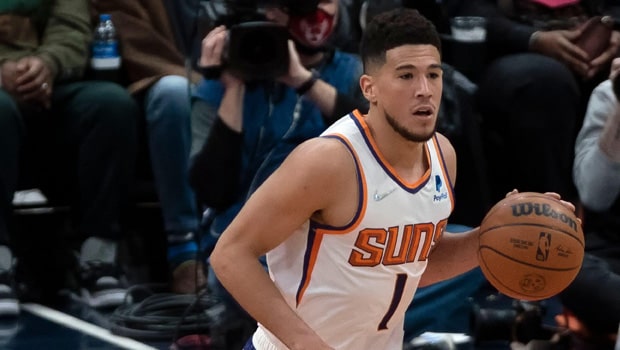 We are in a new era in the NBA. The young kids are here and they are fearless; you can see it in their play. Ja Morant, Luka Doncic, Jayson Tatum, Jamal Murray, Donovan Mitchell, Trae Young, Michael Porter Jr., Zach LaVine, Devin Booker. They’re here and they’re taking over the league.

The game is about a bucket. Always was and always will be. Devin Booker gets them in his sleep. Devin Booker is the best player on the best team in the NBA. For years, casuals said Devin Booker isn’t a winner, that he put up empty stats and is a defensive liability. That’s non-basketball talk. This is why it’s so hard for them to acknowledge him as one of the very best in the world now that he got the situation.

Devin Booker’s style is advanced, polished, smooth, calm; he has a supreme skillset and he’s a legit three-level scorer. Booker can dominate you and take a game over from distance, in the mid-range and his finishing ability is different. Just look at the way Boooker finishes above defenders around the rim. His awareness is elite and he has Kobe Bryant-type skill and movement at times.

You can tell that Devin Booker learned a lot from Kobe. I like his footwork, the way he operates on the low block back to the basket, he’s got floaters, he’s got runners, euros and so many acrobatic moves around the rim, reverse lay-ins from both sides of the floor, right hand, left hand, he can create with range, he can pull up from deep and in transition, play at multiple paces.

Booker just has a great feel for taking a game over. Whether the Suns win or lose, if you look at his moments and performances, there are so many instances of him just taking over. He’s been a different player for a while, you can see all this from the moment he came in to the NBA. Booker is so clutch, he has so many ways to beat you and he plays with a chip on his shoulder while making it look easy.

NBA MVP awards and other achievements are all situational, they depend on where your team is and he hasn’t had a favorable situation until now but for some reason it’s still not enough and the league ignores him. Yes, Jokic and Embiid had terrific seasons but Booker was the best player on the best team this season.