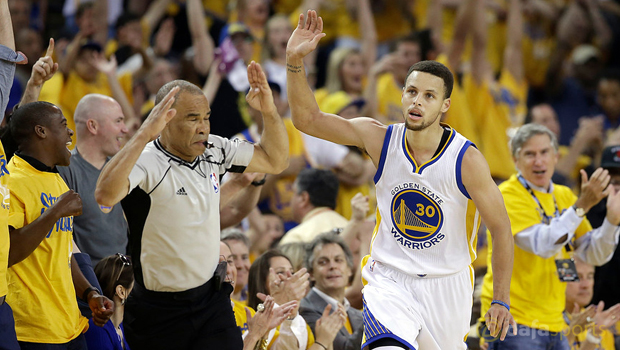 After months of endless battles and struggles between teams, it’s now official. Golden State Warriors will be facing the Cleveland Cavaliers in the NBA 2016 finals.

As history continues, this is a rematch of last year’s matchup where warriors took home their first championship title in 40 years. In spite overwhelming conga lines of opponents, GSW’s journey to the finals isn’t that easy.

Oklahoma City Thunders being the underdog headed the series at 3-1, which was almost impossible for the Warriors to push their hard comeback and aim for the second finals appearance.

Having the momentum, OKC has been given 2 chances to close the series but they failed to do so until Monday when they come back to the Bay Arena to hopefully snatch their first NBA Finals after their maiden voyage in 2012. On the other hand, Warriors have played almost 3 consecutive do-or-dies to keep the dream season alive.

On Monday, Warriors ended the 3-3 rally at 96-88 at the Oracle Arena and will face the Eastern Conference Finals champion Cleveland Cavaliers on Thursday (Game1). As seen before, the Splash Brothers always made the difference with Steph Curry (7 of 12) and Klay Thomson (6 of 11) from the 3-point territory making it 13 3s for the Warriors.

During the series finale, Golden State straggled by as many as 13 points in the first half until they overtake Thunder in the 3rd quarter. When the ball game is about to end, Warriors showed their trademark of basketball sorcery nailing 3-pointers and run for fast breaks.

In the fourth quarter, Warriors’ lead cut by 4 courtesy of Kevin Durant’s short jumper. Curry emerged with the crucial plays and drew a foul against Serge Ibaka while shooting a 3-pointer.

He made all 3 free throws. While Thunders continues with the turnovers, Warriors took advantage in the momentum draining 3-point shots and fast breaks. At the 26-second mark, Steph Curry sealed the win with another 3-point making it his 7th in the evening. The MVP scores a total of 36 points plus 8 assists.

Thunders dictated the tempo since the beginning of the series in terms of rebounding, aggressiveness and snappy passes. They just couldn’t sustain it and Golden State finds the counter.

Warriors celebrated their victory with yellow confetti that fell throughout the Oracle Arena as the final buzzer sounded. Curry doing his signature ball cradled in his left hand and pumped up his right whilst mouthpiece dangling out. On the other hand, Steve Kerr was interviewed and unselfishly shared his thoughts.

“We survived the series by skin out of our teeth. We’re able to pull it out and we’re moving on” he said. In addition to that, he also extends his kind words to Steph. “This is who he is having a clutch performance in Game 7, that’s Steph Curry” Kerr added.

In line with the very impressive performance of the Slash Brothers, the huge participations of Andre Iguodala and Draymond Green highly contributed to the team’s success. “No one had doubt that we could get this one done. People have seen teams down 3-1 but they ain’t seen many. They’ve definitely never seen a 73-win team down by 3-1” Draymond Green said during the interview.

It’s not yet over though. Golden State’s journey to the dream victory has just started as they challenge LeBron James and the Cleveland Cavaliers on Thursday. Would this be a back-to-back championship for the Warriors? Or, would it turn out different with Kyrie Irving and Kevin Love in action? Share your thoughts via comment section.

Check out Finals schedule below: