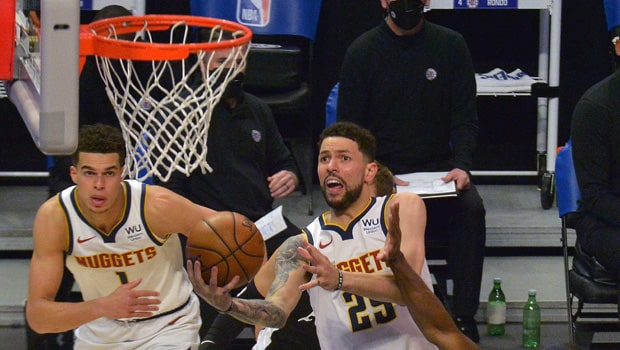 Austin Rivers recently joined the Nuggets, his fourth team in three seasons and sixth team overall and he explained new role. According to Rivers, he has to play as hard as possible and be supportive of his teammates off the court.

Rivers spent a brief period without a team but that helped him find a new perspective on playing this role with the Nuggets. The 28-year-old reflected on his career to adjust to this role in Denver and as a result he is now happier.

The Knicks signed Rivers to a three-year, $10 million contract in the offseason but he fell out of the rotation after just a few weeks. He didn’t play for a while and the Knicks traded him to the Thunder in March. OKC waived Rivers and he was a free agent for several weeks before joining the Nuggets on a 10-day contract. Rivers exceeded their expectation and the Nuggets recently signed him for the rest of the season.

On May 5, after scoring 25 points in 28 minutes off the bench to help the Nuggets beat the Knicks 113-97 (getting some payback against his former team), Rivers explained his new approach and mindset.

“As a player, I’ll be honest, in the past, like all of us do, you wanna do well. You wanna be this, you wanna be that guy. I was that guy in high school. I wanted to be an All-Star — I still feel like I’m good enough to be that.

So, I got in there, I do my thing, I play hard, but whether I play, or whatever platform I’m on, if I’m in the game, not in the game, I’m nothing but positive energy. That’s all I try to bring to this team every game.”

Rivers then said that nearly having basketball taken away from him taught him to appreciate it even more and embrace any role. He also reflected on what he could change.

“When you’re not playing for two months, and something’s taken from you — it changed me,” Rivers explained. “I had to look in the mirror and say, ‘Okay, I still have to change. It’s not all New York’s fault … I have to do better.’ So, I’m working on that every day.”