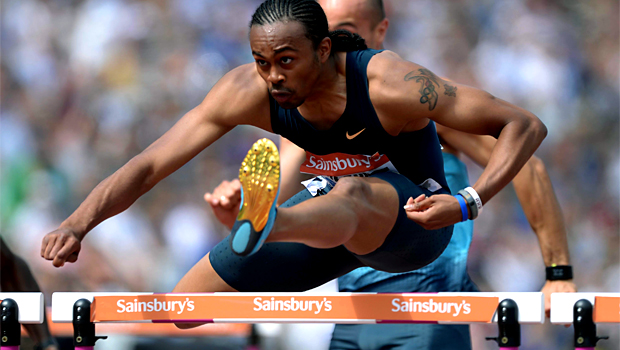 Olympic champion Aries Merritt is looking to go under 13 seconds when World Championships get under way in Moscow at the weekend.

Merritt has been off the radar during the first half of the year due to a hamstring injury, but is now raring to go in a bid to show the world that last year’s staggering achievements were not just a one-off. The American went under 13 seconds no less than eight times in that spell, with the time only bettered by anyone other than himself on just four other occasions.

Merritt captured Olympic Gold in London in 12.92 seconds and set a world record of 12.80 in September, and is now ready to step up to the mark again. He has left a bit to work on in the build up to the Wolrd Championships, having posted 13.09 in Paris in July, a time that leaves him only fifth in this year’s rankings.

However, while Merritt has been on the comeback trail, he finds it strange that nobody has taken advantage to stamp their claims.

“It’s really strange, I was thinking some of the guys who weren’t injured would get under 13 so it’s weird that they’re not,” he said.

“Everyone knows I hurt the hamstring, but I’m ready for the race of my life. My fitness is great now and training has been great and I finally feel ready to give the fans what they want – that magic barrier of under 13 seconds.

“The practice track is extremely fast and I’ve been told the stadium track is very similar to London, apart from the fact that it’s blue, so we should see some fast times.”

The United States used to dominate the 110m hurdles but their crown has slipped slightly in recent years. Now though they can boast a very strong squad in the men’s event, as they can in the women’s competition as well, with Dawn Harper, Queen Harrison, Nia Ali and Brianna Rollins all in excellent shape. The stumbling block for the women though is the formidable Australian Olympic and world champion Sally Pearson.

The World Championships begin on Saturday in Moscow.