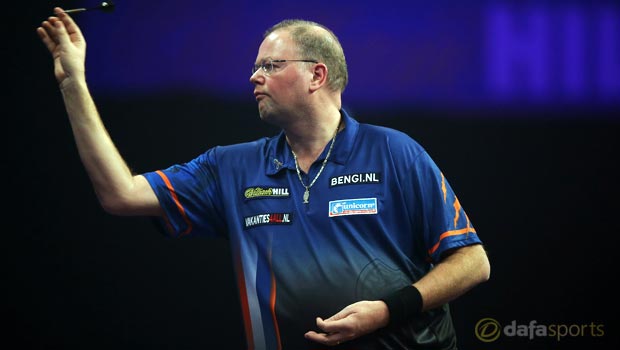 Defending champion Raymond van Barneveld has warned his rivals he is not prepared to give up his Premier League Darts title lightly.

World number one Michael van Gerwen, three-time major finalist Dave Chisnall, world champion Gary Anderson and holder van Barneveld will on Thursday meet for the final time in this year’s competition for the right to be crowned winner of the gruelling four-month event.

Chisnall (2.30 match prices) and Anderson (1.57) are first up in a mouth-watering last-four clash at The O2 Arena and Netherlands favourite van Barneveld (3.80) will then take on van Gerwen (1.25) in the other semi-final in a repeat of last year’s final.

Five-time world champion van Barneveld was staring at the prospect of relinquishing his title early on but secured survival with a draw against Anderson and has since embarked on an eight-game unbeaten streak to emerge as the form player.

“I had a draw against Gary in Week Nine and wasn’t eliminated and I’m really pleased that in the seven games since ‘Judgement Night’ I’ve had six wins and a draw,” he told reporters in his press briefing.

“I believe in myself again – I’m not watching any other players because I know how brilliant they are, but I’m a good player as well and if you believe in yourself – like last year – anything can happen.”

Van Barneveld said he is focused on realising his ambition of becoming only the second player, behind his great rival, Phil Tylor, to retain the Premier League title.

“If you win the World Championship it’s two or three weeks, but the Premier League is 16 weeks among the best players in the world and if you win that it means a lot,” added the 48-year-old. “It means that you’re the most consistent player in the field.

“If you retain that title then you’re an unbelievable, amazing player and you’ve shown the rest of the world that you can beat any other player in the field and that’s what I want to prove.”