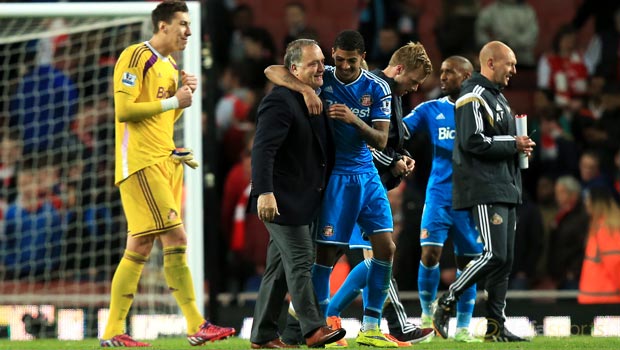 Dick Advocaat guided Sunderland to Premier League safety for another season – then revealed he will decide on his future at the Stadium of Light next week.

A goalless draw against Arsenal at the Emirates Stadium on Wednesday guaranteed the Wearside club another campaign in the top tier of English football and means either Hull City or Newcastle United will be relegated to the Championship on the final day of the season on Sunday.

The veteran coach, who was appointed until the end of the season when he took over from the sacked Gus Poyet in March, was moved to tears at the final whistle.

“I have to think about everything,” he told reporters when asked about his future.

The 67-year-old has only one game left in charge of the north-east club, against champions Chelsea at Stamford Bridge on Sunday, and revealed this will be his last managerial job – if he stays or goes.

“I will give an answer on that next week. If you don’t mind I will keep that to myself,” added the former Rangers manager.

Advocaat’s first game in charge was a 1-0 defeat by West Ham United but he has since only lost once in a seven-game unbeaten run to mastermind a successful fight against relegation.

The former Netherlands coach added: “It is not about me. It is about everyone who is involved in the club, the owner Ellis Short and the people in the office, the players.

“The easiest way to work with the team is to start from day one with everyone believing and they did that.

“Nobody was expecting we would do it here against a great team but if you do it on your own, like we did, it gives me a special feeling.”

Chelsea are currently priced 1.33 in the match betting and the draw outcome is quoted 475. Sunderland can be backed in the 90 minutes market at 8.50.