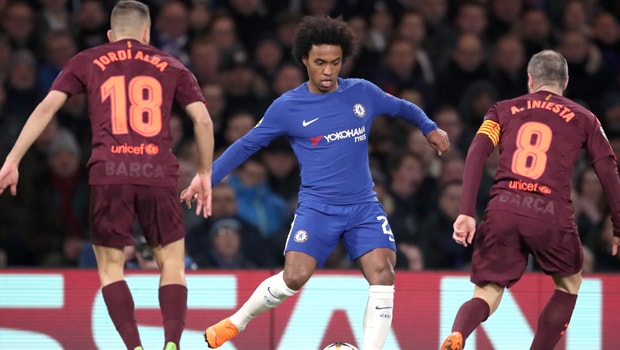 Chelsea forward Willian was coy when asked about his future at the five-time Premier League champions and insists his focus is on helping Brazil win the 2018 World Cup.

Speculation has been rife about Willian’s future at the Blues following reports his relationship with manager Antonio Conte, who is expected to be replaced by Maurizio Sarri, broke down last season.

Manchester United boss Jose Mourinho is believed to be keen on a reunion with the forward, while La Liga champions Barcelona have also been credited with an interest after being impressed with what they saw in the Champions League last-16 tie last season.

It is thought an offer around £55million may be needed to prize the 29-year-old away from Stamford Bridge this summer although Chelsea’s managerial situation will need to be resolved before any deal can happen.

Willian was recently quizzed by reporters about his future in England but gave little away when asked whether or not he would like to play with some of his countrymen at Barcelona.

“Well, they are excellent players with a lot of quality,” he was quoted as saying by the Standard.

“In addition to great players, they are very good friends.

“People speculate a lot. We see a lot of things on the internet but this is not the time to talk about this. I’ve not received any information about that. I’m trying to focus on my performance, playing for Brazil.”

Willian is expected to start Brazil’s World Cup quarter-final against Belgium on Saturday as the Selecao, who are 3.50 favourites to win the tournament, aim to reach the semi-finals for the 12th time.