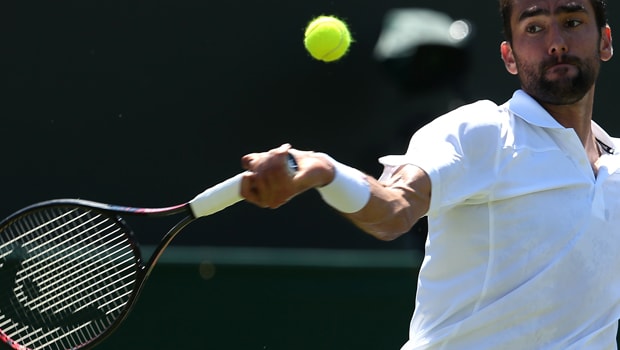 Marin Cilic was knocked out in the second round of Wimbledon by Argentina’s Guido Pella, who gallantly fought back from two sets down to defeat the third seed.

Cilic was beaten by Roger Federer in last year’s Wimbledon decider but he was an early casualty following an overnight rain delay in his second-round clash.

He was seemingly in control when the rain arrived, leading by two sets to nil, but he forfeited that lead and surrendered in five sets.

Pella had failed to win a match in two previous visits to Wimbledon and he was in no doubt that the rain delay had aided his cause greatly.

“The rain coming helped me a lot,” the 28-year-old told BBC Sport.

“He was playing so, so well and I couldn’t do anything.

“[On resumption], I started to play more aggressively and fight for every ball and that is why I won. Grass isn’t my favourite surface but I started to feel more confident and served a lot better.”

Pella will now play American world number 103 Mackenzie Mcdonald, who is also making his first appearance in the last-32 of a Grand Slam event, and he’s eager for the next challenge.

“[It] is a different match and we will both have pressure so it will be a tense match but I will try to be calm and win,” Pella added.