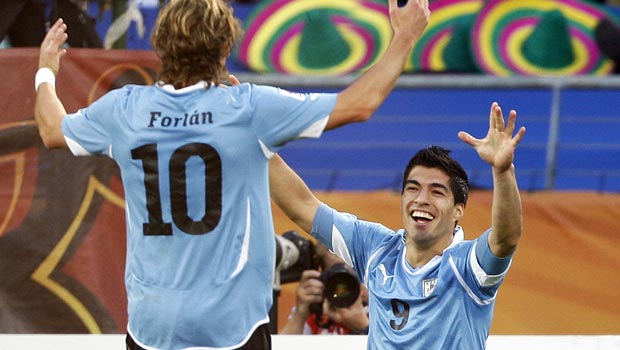 Diego Forlan insists his Uruguay team-mate Luis Suarez is in “good shape” and is willing him back to full fitness ahead of the World Cup.

Suarez has been a major injury concern for the South American side ahead of next month’s World Cup in Brazil having undergone knee surgery at the end of the Premier League season.

He is being monitored on a daily basis by a team of medics who are hoping to guide him to fitness before their first World Cup game against Costa Rica on June 14.

And Forlan, who knows his place in the team will be in jeopardy if Suarez is fit, insists the striker is making good progress in his recovery.

“I want the whole team to be healthy and ready for the World Cup so I want Luis to be back and ready for that,” Forlan told Press Association Sport. “That would be much better for all of us. Luis came to the training ground in the morning to see us.

“We haven’t seen him for a week so it was nice to have him around again. He told us he is in good shape and recovering well and his treatment has been good. Everybody wants him to be ready.”

Forlan played 45 minutes in the early hours of Saturday morning as Uruguay beat Northern Ireland 1-0 in a pre-World Cup friendly.

The 35-year-old striker insists the match was ideal for Uruguay, who are set to come up against England in World Cup Group D on June 19.

“It was good preparation because Northern Ireland play in the same style as England,” he said. “The England game is not more important for me because every game in a World Cup is just as important, but it will be a tough one.”