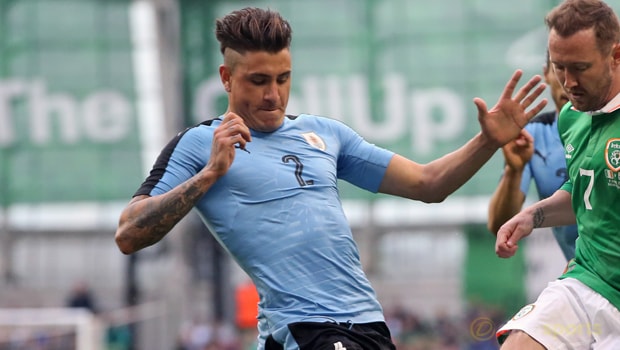 Uruguay defender Jose Maria Gimenez says his sole focus is the World Cup and doing well for his country amid speculation over his future.

The Atletico Madrid player has been linked with a move across the Spanish capital to European champions Real although he prefers instead to focus on Russia.

He was part of the Uruguay team that won 3-0 against 10-man Uzbekistan on Thursday, with Gimenez scoring the final goal, and afterwards he wasn’t getting too carried away over speculation Real Madrid might be about to meet the 60million euros release clause in his contract.

“I don’t think on that,” Gimenez told reporters when asked if he thought about leaving Atletico.

“I’m thinking on playing a good tournament and to prepare myself well for it, and that’s all.”

Uruguay will now turn their attention to the Group A opener against Egypt on June 15.

While there are big doubts surrounding the participation of Mohamed Salah, Gimenez insists he wishes the Liverpool forward well in his bid to be fit.

“I hope he goes there because he wants to play this World Cup. Personally I like to play against the best players of the world and Salah is one of the best, so I hope he goes,” Gimenez added.

“This is like every other cup we had played before. Of course we are going for the victory but fear is a factor which plays a role there, too.”