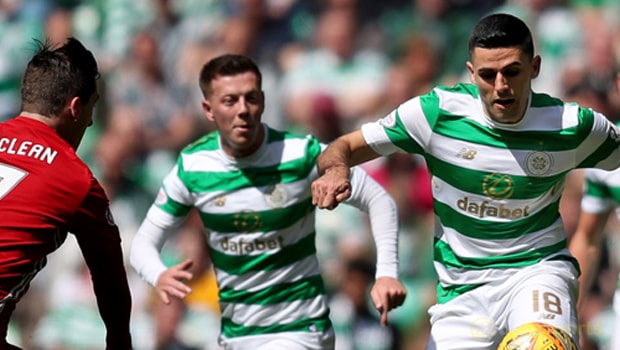 Tom Rogic says he will draw on his experience in the Champions League with Celtic when he represents Australia at the World Cup.

The 25-year-old midfielder is preparing for his first World Cup finals with the Socceroos, having missed out on a place in the squad four years ago, and he will be hoping to play a key role in the matches against France, Denmark and Peru.

The former Central Coast Mariners player will come up against world-class stars such as Paul Pogba and Christian Eriksen during the group stage, but he is no stranger to facing quality opposition as he has played a prominent role in Celtic’s last two Champions League campaigns.

Rogic is now hoping to draw on his experiences from Europe’s premier club competition during his time in Russia although he knows the World Cup will be completely different to anything he has participated in before.

“It’s going to be new to me, having never played in a World Cup before,” Rogic was quoted as saying by the Daily Record.

“But I’ve certainly played in big matches on a big stage, the great Champions League nights that give you a taste of what it will be like in Russia.”

With Scotland having failed to qualify, Rogic is hoping the Celtic fans will adopt Australia as their country to support during the tournament.

“It’s a nice bonus to think we’ll have Celtic fans supporting us just a bit,” he added.

“It’s disappointing Scotland aren’t going to be at the World Cup but hopefully a few more take interest in Australia.”

Australia have not made it through to the knockout stages of a World Cup since 2006. They are priced at 4.50 to qualify from Group C this time around.