Andres Iniesta confirms end of the road with Spain 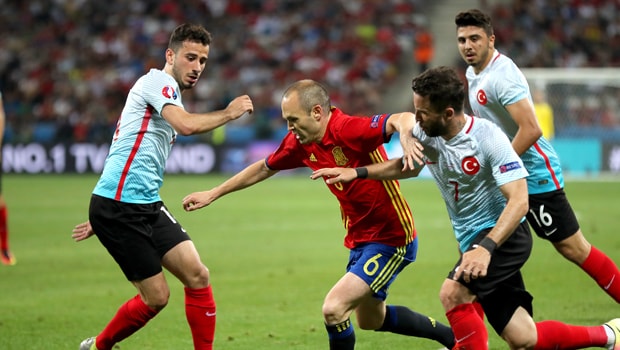 Andres Iniesta has confirmed his retirement from international football after Spain were dumped out of World Cup by hosts Russia in Moscow.

The 34-year-old midfielder scored an extra-time winner as Spain defeated the Netherlands 1-0 in the 2010 World Cup final in South Africa.

His hopes of a repeat win eight years on were halted on penalties by the plucky Russians in the last 16.

Spain led early through an own-goal from Sergei Ignashevich at the Luzhniki Stadium but they were pegged back after Gerard Pique’s handball allowed Artem Dzyuba to level from the spot.

Despite a lion’s share of possession and introducing Iniesta from the bench, Spain couldn’t breach the Russian defence and they were ousted after errant spot-kicks from Koke and Iago Aspas in the shoot-out.

Iniesta is heading to Japan after ending an illustrious career with Barcelona and he has called time on his days in the famous red shirt of Spain, having scored 13 goals in 131 appearances for La Furia Roja.

“Sometimes the endings are not how you dream them, but these things happen in life,” he said.

“It is a reality that that is my last match with the national team and on a personal level it’s the end of a magnificent phase. Overall, I think it’s the saddest day of my career.

“It’s bad, it’s tough. It’s a difficult moment, one we have been through on various occasions – we weren’t capable of doing that little bit extra.

“We are angry because we weren’t able to take another step and we didn’t rise to the occasion, despite trying everything.”

Russia are 23.00 to win the World Cup after eliminating Spain.