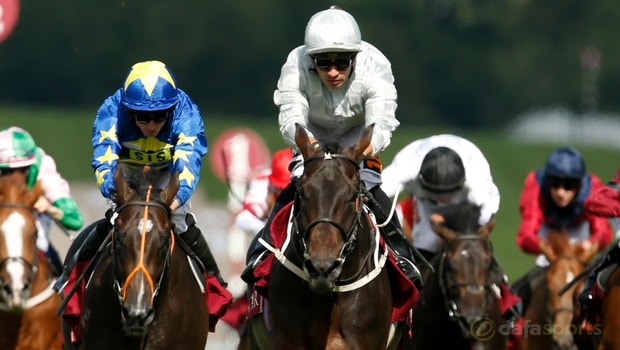 Mark Johnston remains committed to a tilt at the St Leger at Doncaster with Dee Ex Bee despite a disappointing showing in the Irish Derby at the Curragh.

Dee Ex Bee had finished an excellent second to Masar in the Derby at Epsom early in June but, four weeks later, he wasn’t able to produce similar form in Ireland.

He’d finished three lengths in front of Saxon Warrior in that race, Aidan O’Brien’s colt having been sent off favourite at Epsom and the Curragh, but was four lengths down on the Ballydoyle colt, who finished third, this time.

Dee Ex Bee was never travelling comfortably for Silvestre De Sousa and was the first to come under pressure, eventually finishing seventh.

The winner Latrobe was trained by Joseph O’Brien and ridden his brother Donnacha, as they claimed a famous scalp and stopped their father, Aidan, winning the race for the eighth time in 11 years. For Johnston, it was evident early on that his charge wasn’t taking to the task.

“It was obvious Dee Ex Bee was never really travelling early on and he looked the first one beaten, but he did stay on well at the finish, so we would put that down to him not acting particularly well on the ground, particularly on the downhill parts of the track,” he said.

The final British Classic of the season on September 15 at Doncaster is still very much on the radar, with a potential stop at York before then.

“The long-term target is still the St Leger, but we haven’t discussed the stepping points to Doncaster,” Johnston added.

“I’m sure we’ll look at the Voltigeur, or something like that, but the only firm plan is the St Leger.”

Dee Ex Bee is 7.00 joint-favourite to win the St Leger while Latrobe has now joined him at the head of the betting for the autumn Classic.