Paul Pogba: ‘We fear nobody’ 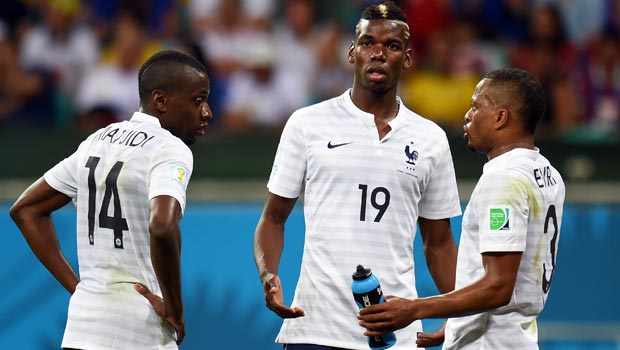 France midfielder Paul Pogba has revealed that his side “fear nobody”

during this summer’s World Cup as they try to win the competition for the first time since 1998.

Les Blues are fancied by some to go all the way at this summer’s tournament in Brazil after a number of impressive performances.

After topping Group E over Switzerland, Ecuador and Honduras, France toppled Nigeria on Monday night and have now set up a quarter-final tie against Germany.

France were made to work hard for their victory by Nigeria but they eventually found their breakthrough in the latter stages of the game.

Pogba grabbed the first when Nigeria keeper Vincent Enyeama missed the ball from a corner and the Juventus man nodded the ball into an unguarded net.

Substitute Antoine Griezmann caused havoc late on and he played a part in the second goal. Mathieu Valbeuna’s inch-perfect cross was almost put away by the Real Sociedad man but former Everton defender Joseph Yobo got the final touch to ease any French nerves.

Despite coming up against Germany in the next round, Pogba insists his side is full of confidence and the former Manchester United midfielder is dreaming of taking on Brazil in the semi-final.

“We’re France and we fear nobody,” he is quoted as saying by www.sportal.co.nz

“I’d like to play Brazil in the semi-finals. I saw the 1998 France vs Brazil final as a kid. It would be a great to play a repeat of that game and win again.”

France are currently available at 2.95 to beat Germany, with the draw 3.27, while Joachim Low’s side are the favourites at 2.35 with Dafabet.