Neymar ruled out of World Cup 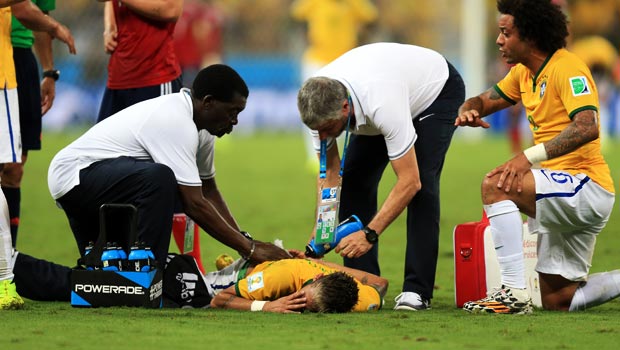 Brazil boss Luis Felipe Scolari has said that star forward Neymar will miss the rest of the World Cup after being stretchered off in his side’s 2-1 victory over Colombia on Friday.

The Selecao did not look at their free flowing best against fellow South American opposition but managed to hang on in the closing stages.

Scolari’s side took the lead after just seven minutes of the tie in Fortaleza when Thiago Silva was allowed room to bundle home at the back post from a corner.

The hosts looked much the better of the two teams in the opening 45 minutes with Colombia failing to test Julio Cesar and star man James Rodriguez tackled out of the game.

Brazil, who are priced at 3.45 to win the World Cup, added a second on 68 minutes when David Luiz scored an extraordinary free-kick from 35 yards to put themselves firmly in the driving seat.

However, Colombia found a route back into the tie when substitute Carlos Bacca was brought down by Cesar and Rodriguez kept his composure to score his sixth goal of the tournament from the penalty spot.

An injury to Neymar late on was the talking point for Scolari after the game, the Barcelona forward was stretchered off after Juan Zuniga caught him with a knee to the back, which ultimately fractured a vertebra in his spine.

Scolari was critical of referee Carlos Velasco Carballo, who failed to show a card in the direction of the Colombia man.

Scolari said: “He wasn’t booked for the foul on Neymar but he shows Thiago Silva a yellow card for standing and pulling the goalkeeper.

“Neymar was going to be hunted. For three matches that has been happening.

Team doctor Rodrigo Lasmar confirmed following scans at hospital that the 22-year-old would play no further part in the competition.

Lasmar said: “Unfortunately, he’s not going to be able to play. He is very, very sad.

“It’s not serious in the sense that it doesn’t need surgery, but he’ll need to immobilise it to recover.”