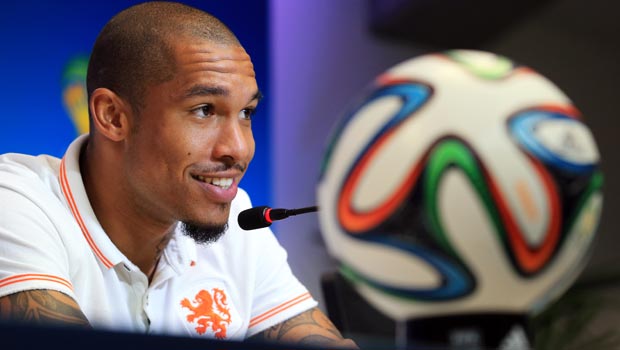 Holland midfielder Nigel De Jong has called on his team-mates to remain calm as they prepare to head into Saturday’s World Cup quarter-final tie with Costa Rica.

De Jong will play no further part in the World Cup after tearing his groin during the thrilling 2-1 last-16 victory over Mexico.

However, the AC Milan midfielder has remained in Brazil with the side to offer support and advice as one of the more experienced players in the squad.

The Oranje, who are valued at 5.30 to win the World Cup, head into Saturday’s meeting at the Arena Fonte Nova in Salvador as the heavy favourites but the former Manchester City man believes their opponents must be taken seriously.

Los Ticos have already provided a few shocks in the tournament after beating Uruguay and Italy, while drawing with England to finish top of Group D.

De Jong said: “Everybody’s thinking of the finals or semi-finals, but this is going to be a very tough match.

“The guys are all doing this together, whether it’s the ones on the pitch, or those on the bench that are not playing, this is a team effort.

“You can only face the pressure together and share experiences with each other.”

The 2010 runner-up believes that Louis van Gaal’s side must try not to let the pressure get to them and has called for ‘focus’ as they look to seal a place in the last four.

He added: “I think this is the best and most important stage for any professional football player so what you should try and focus on is to try and not feel the pressure, to go on the pitch without feeling the pressure.

“We are not there yet. First of all we have to get through this match.”