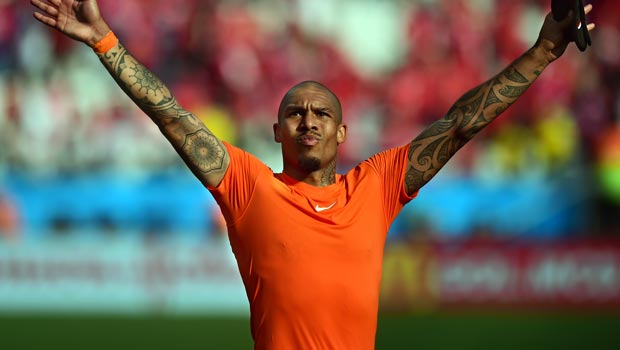 Netherlands boss Louis van Gaal has been dealt a blow as Nigel de Jong will miss the rest of the World Cup due to a groin injury.

The former Manchester City midfielder only lasted nine minutes during Sunday’s game against Mexico. He was quickly replaced by Van Gaal and the incoming Manchester United boss admitted after the 2-1 win that there was a chance he could miss the clash against Costa Rica.

The Dutch FA (KNVB) have now confirmed that De Jong has a tear in his groin and will need up to four weeks to recover, with the World Cup final taking place on July 13.

“An MRI examination at hospital confirmed that Nigel de Jong is struggling with a tear in his groin muscle,” the KNVB said in a statement.
“The 75-times capped international is therefore presumably out for two to four weeks.

“De Jong, who in last Sunday’s match against Mexico was injured after nine minutes, remains with the team in Brazil to work there on his rehabilitation.”

De Jong’s absence against Costa Rica will be a big blow with the 29-year-old providing defensive cover for the likes of Wesley Sneijder, Arjen Robben and Robin van Persie.

Before De Jong was officially ruled out, Robben admitted he would be missed but he is confident that the squad can handle the absence.
He said: “The possible absence of De Jong in the quarter-finals is a heavy loss.

“But our strength is that every player who comes off the bench on to the pitch manages to have a big impact on the match.
“The confidence within our team is very big, in spite of any absence.”

Netherlands are 1.49 favourites to beat Costa Rica, with the latter 7.37 to win, while the draw is available at 3.80 with Dafabet.