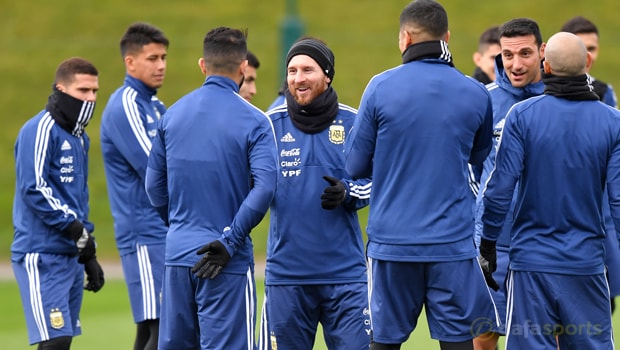 Goalkeeper Nahuel Guzman says the expectation on Lionel Messi must be toned down ahead of the World Cup.

The 30-year-old will lead La Albiceleste in Russia, his fourth World Cup, with the forward having never won the tournament.

The closest he has come was in Brazil in 2014 when Argentina were beaten in the final by Germany after Mario Gotze’s late extra-time winner.

Messi has enjoyed another superb season at club level, netting 45 goals in 54 appearances in all competitions, and will be hoping to replicate the same form for his country.

However, Guzman, who was drafted into the squad to replace the injured Manchester United stopper Sergio Romero, says everyone must contribute, not just Messi.

“Of course Leo is a very important figure to us. We have to know how to be with him. He has to let us, too,” he told a news conference Wednesday.

“And we have to somehow take away the responsibility he already has. He feels it, too. We also have several figures to be a friend to him and make him feel good.”

Guzman added: “I’ll try to be with him at any moment. I will try to lift him up if I see he’s doubtful. And we hope to be able to celebrate, next to him, each game. We have to be calm that Leo’s fine.”

Argentina get their World Cup under way on Saturday against Iceland and are overwhelming favourites to win at 1.36, with Iceland rank outsiders at 10.00.