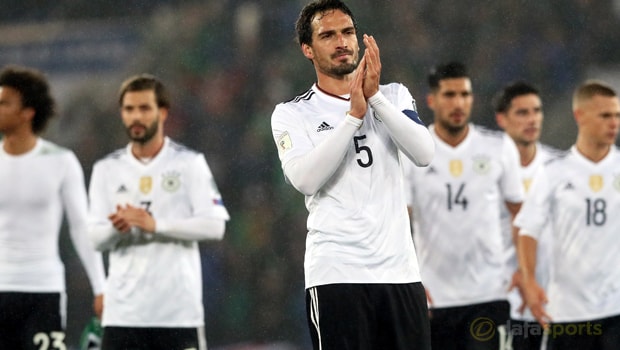 Germany defender Mats Hummels has hit out at the attitude of some young players and insists Leroy Sane should not be held in the same regard as some of his team-mates.

The Manchester City star hit the headlines earlier this week as he was dropped from the 23-man squad for the upcoming World Cup in Russia.

Joachim Low decided to go with Julian Brandt as his extra midfielder and many have criticised the decision. Former Germany star Michael Ballack admits he does not understand the decision but Hummels insists the country must back Low’s decision making.

Hummels insists Sane is not as important as Mesut Ozil and Thomas Muller and he believes the younger generation need to learn some lessons from the more experienced players.

He told reporters: “Leroy Sane has not the same standing as Thomas Muller or Mesut Ozil.

Sometimes it takes time to have the same standing in the national team as in your club.

“It is noticeable that the guys coming up from youth ranks – at Bayern too – are different guys to 10, 12 years ago.

That is the new generation. They are characterised by a different behaviour, like on social media.

“I was always the youngest one in my team and I had to carry the goals. That is simply normal. Nowadays you notice some 18-year-olds don’t understand why they have to do this.

“I didn’t talk a single word in the Bayern locker room during the first weeks. I only talked to Stephan Furstner and Michael Rensing because I knew them from the second team.

“To everyone else I maybe said ‘hello’, but today everything is faster and after one week players behave like they’ve already played three years for the team.”

Despite Sane’s omission, Germany are still second favourites to win the World Cup at odds of 5.50.