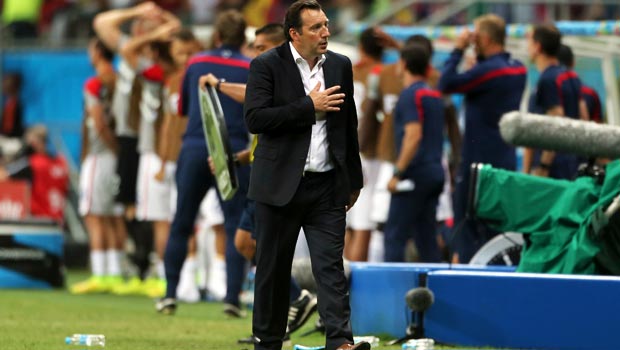 Marc Wilmots insists that Belgium will not change their philosophy of playing attacking football when they take on Argentina in the World Cup quarter-finals on Saturday.

The Red Devils have only secured progression to the semi-finals at a World Cup once before – losing 2-0 to Argentina in Mexico in 1986.

Wilmots’ men qualified for the tournament in Brazil with a number of scintillating attacking displays but have failed to show that sort of form in South America.

However, they did manage to seal progression from the group with three wins from as many games before seeing off a plucky USA in extra time in the last-16.

The 45-year-old Wilmots insists that his side can still raise their game a level and has urged star man Eden Hazard to make an impact.

Wilmots said: “We are ready to go beyond our limits and I know the players on the bench can make the difference.

“I told Eden Hazard he can do more and be more effective. He needs to work within the team.

“Although I expect a very tactical and close match, we maintain our philosophy, which is to attack. We can write history. The players know it.”

The former Schalke boss played down claims that La Albiceleste rely on Lionel Messi, insisting that they have a number of players who they will have to be wary of if they want to make the last four.

He added: “Many have said Argentina are not just Leo Messi and they are absolutely right.

“It’s only normal there is a focus on Messi, but I watched Argentina against Switzerland and it’s a really strong team, not just one or two players. They are at the service of Messi.”

Argentina have been installed as the 1.97 favourites in the match betting, with the draw on offer at 3.23, while Belgium are seen as the outsiders at 4.30.