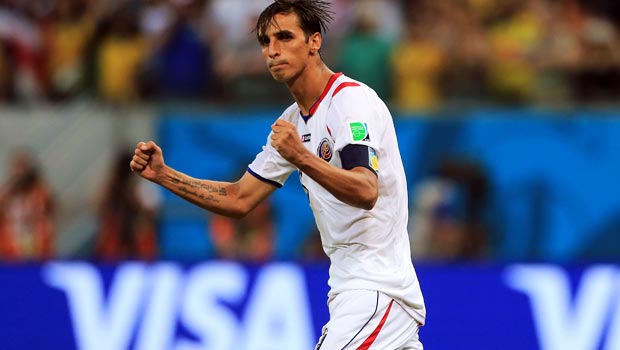 Captain Bryan Ruiz insists that Costa Rica are more than capable of causing another upset when they take on Holland Saturday’s World Cup quarter-final.

Los Ticos, who are priced at 50.00 to win the World Cup, entered the competition as massive outsiders after being drawn in a tough group alongside Italy, Uruguay and England.

However, they proved to be the surprise package and claimed top spot in Group D with victories over Uruguay and Italy, while playing out a draw with Roy Hodgson’s men.

And now Ruiz – who spent the second half of last term playing for PSV in Holland – believes that the Central American side can find a way past the 2010 World Cup runners-up.

Ruiz said: “Holland is a great team, but I have to be honest and say that we have a good chance of beating them.

“But we have to take care of a lot of details if we want to win.

“Saturday’s game is like a final for us, but we don’t want to stop there.”

Boss Jorge Luis Pinto has urged FIFA and the match officials to keep a close eye on Holland forward Arjen Robben ahead of the tie after he admitted to diving during his side’s last-16 tie Mexico.

Pinto said: “I would like to ask FIFA and the referees to watch Robben.

“We’re really worried about his diving. He has admitted doing it.”

The 61-year-old went as far as suggesting that the Bayern Munich star should be sent off if he dives to try and win his side an advantage.

He added: “That may be the most logical solution.

“Maybe he would have to leave the field because he gets two yellow cards for diving.”

Holland are priced at 1.52 to pick up the win with the draw available at 4.00 while Costa Rica are on offer at 7.04 to spring yet another surprise.