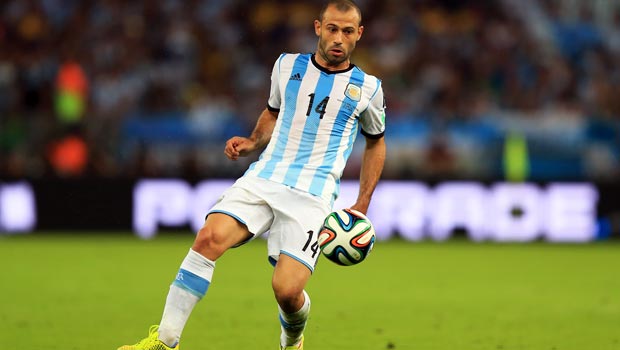 La Albiceleste have not managed to secure the title since 1986 and their appearance in the semi-finals in 2014 is the first time they have reached the last four since 1990 when they were beaten in the final by West Germany.

Mascherano has welcomed Argentina’s run to the semi-finals but the Barcelona midfielder, who can also operate in defence, now has his sights set on a place in Sunday’s final at the Maracana.

“Of course it is fantastic to have got to the semi-finals but now we want to be in the Maracana on July 13. The expectations are growing and we have to try and match them,” he said.

The South American heavyweights take on the Netherlands in the last four on Wednesday and Mascherano expects a stern test from the side that were beaten in the 2010 final by Spain, but he is confident Argentina can overcome the European outfit.

He added: “The squad is very happy and we go into such a massive game with real enthusiasm. We know we will have a great chance on Wednesday.

“To reach the semi-finals was not only a relief for me but for all the guys. We knew what was at stake and we were so desperate to stay at the World Cup.

“When we went to bed we knew that when we woke up, the first thing in our minds will be Holland. To think about being in a World Cup semi-final is a unique and beautiful thing to experience.

“For a football fan like me, 24 years is a very long time. The expectations grow but fate has put us where we are now. We need to keep up.”

Argentina will be without Real Madrid star Angel Di Maria due to a thigh problem but fellow forward Sergio Aguero has been declared fit, while left-back Marcos Rojo returns from suspension.

Argentina are 3.35 to win the World Cup outright and 2.41 to beat the Netherlands in 90 minutes on Wednesday.