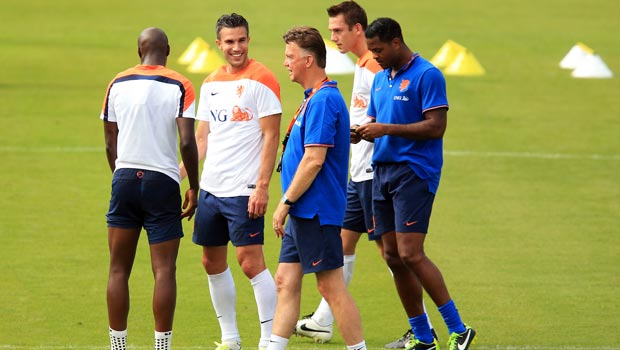 Robin van Persie insists he isn’t interested in individual plaudits and is only focused on success for the Netherlands at the World Cup.

The 2010 beaten finalists take on South American heavyweights Argentina in the last four on Wednesday, with Germany and hosts Brazil set to contest the other semi-final on Tuesday.

Van Persie has three goals to his name so far in Brazil and is a contender for both Golden Boot and Golden Ball honours, awarded to the top scorer and best player respectively, but the Manchester United striker insists he is only thinking about team success.

He told the official Fifa website: “The World Cup is not about Robin van Persie. It is about our team doing well.
“I love a big tournament, but I don’t need to have the limelight.”

Van Persie, who is 19.00 to be the tournament’s top goalscorer, has been substituted by boss Louis van Gaal three times during the competition to date but the frontman insists he has no issues with the manager’s decisions.

Indeed, the removal of the striker proved key in their last 16 win over Mexico as Van Persie was replaced by Klaas-Jan Huntelaar with the Netherlands trailing 1-0. Van Gaal’s side went on to claim a 2-1 win, with Huntelaar grabbing the winner from the spot, and Van Persie insists that he doesn’t mind being sacrificed for the greater good.

“The atmosphere is excellent, I don’t have anything at all to complain about.”

The Netherlands are 3.11 to beat Argentina in 90 minutes on Wednesday and 4.40 to win the World Cup outright.