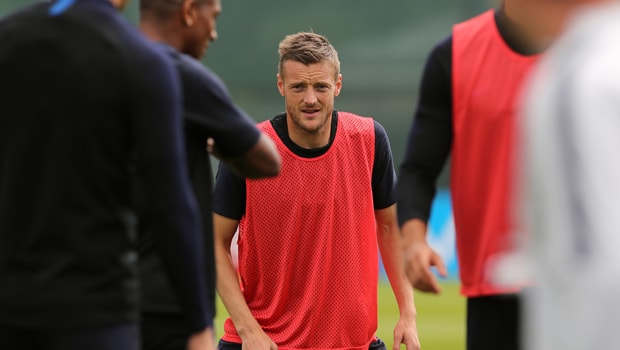 Jamie Vardy has likened the positive mood in the England camp to that of Leicester’s Premier League-winning squad.

Forward Vardy scored 24 goals as Leicester made an improbable surge to title-winning glory in 2015/16, doing enough to earn himself a place in the England squad for Euro 2016.

The 31-year-old has stayed in the Three Lions’ set-up since and he feels there are similarities between Gareth Southgate’s group and what he experienced with the Foxes in their famous season.

“We were exactly the same, very close (at Leicester) having a laugh and joke at training,” Vardy said ahead of England’s opening game against Tunisia on Monday.

“I think that when you are enjoying it more, you play your best football.

“We have all got that mentality where you just want to win. We want to make sure we are here as winners.”

Games against Panama and Group G favourites Belgium will follow for England. With skipper Harry Kane almost certain to start and Manchester United’s Marcus Rashford pushing hard, Vardy concedes he may have a bit-part role in Russia.

Even so, he knows the importance of training hard and being ready to go if called upon.

“You can only have 11 players on the pitch, just have to make sure you put in the pressure on the training field, and if you get given a chance, take it,” he added.