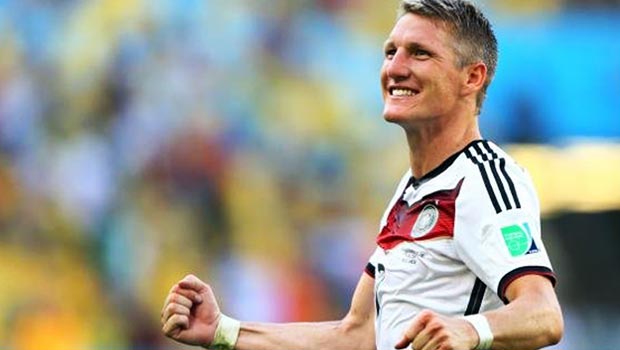 Germany midfielder Bastian Schweinsteiger fears the loss of star player Neymar could “create strength and weld together the Brazilian team” in their World Cup semi-final on Tuesday night.

The tournament hosts were left counting the cost of Friday night’s 2-1 quarter-final win against Colombia when their talisman was left in agony when suffering a broken vertebra in a challenge from Juan Zuniga.

Neymar was immediately ruled out for up to six weeks which seems to give the Germans an advantage looking ahead to the game in Belo Horizonte.

Schweinsteiger is refusing to take anything for granted because he believes the team spirit, nous of coach Luiz Felipe Scolari, who guided Brazil to World Cup glory in 2002, and the backing of the fervent home fans will help replace the impact of Neymar.

“We are all very sad that Neymar can’t play,” he told a press conference. “It is always best if all the big players are on the pitch for the big games.

“But the loss of Neymar can create strength and weld together the Brazilian team.

“The have two experienced coaches [Scolari and assistant manager Flavio Murtosa], who have already both been world champions. I believe that the team which will win the title will have a very clever coach. In addition there is the individual class of each player.”

The 29-year-old Bayern Munich star also feels the Germans are an improved team to the one which lost to Spain in the semi-finals in South Africa four years ago.

He added: “The team is another step forward.

“Every individual player has developed further at his club. The number of good players has also increased.”