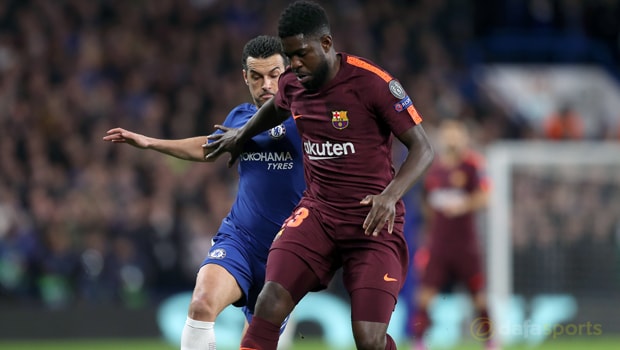 Barcelona defender Samuel Umtiti is adamant he can form a strong defensive partnership with Real Madrid’s Raphael Varane at the 2018 World Cup.

Les Bleus head into the major event in Russia full of optimism after being edged out in the Euro 2016 final by Portugal and they are being tipped to lift the trophy for the first time since 1998.

Didier Deschamps’ squad looks strong ahead of the tournament, with the likes of Kylian Mbappe, Antoine Griezmann, Thomas Lemar, Nabil Fekir, Ousmane Dembele and Olivier Giroud showcasing their strength in the attacking department.

Les Bleus are also blessed with options at the back despite losing Arsenal defender Laurent Koscielny to injury, with the centre-back combination likely to be Umtiti and Varane.

Both players have become integral first-team members for Barcelona and Madrid respectively and the Blaugrana ace believes the duo can work well together for the national side.

“We know that our job will be very important,” Umtiti told L’Equipe.

“During the last meetings, we were able to get a run of matches together — whereas we rarely played together before that.

“It’s about finding automatic reflexes in central defence, because sometimes you don’t have the time to talk to each other and to know how the other plays or perceives certain situations. You need games and dialogue.

“Raphael is someone who’s very intelligent. He plays for one of the biggest clubs in the world. So I don’t think we’ll have any problems in finding a way of complementing each other.”

France, who are 7.50 to win the World Cup, have been drawn in Group C alongside Australia, Peru and Denmark.

Griezmann, who netted 19 times in La Liga this season, is 13.00 – the same price as Portugal’s Cristiano Ronaldo, to finish as the tournament’s top goalscorer.